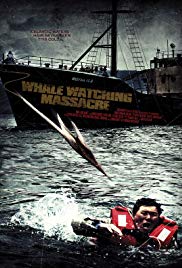 Storyline:
An epic tale about a group of whale watchers, whose ship breaks down and they get picked up by a whale fisher vessel. The Fishbillies on the vessel has just gone bust, and everything goes out of control.
User Reviews: Just saw this "Reykjavik Whale Watching Massacre" at the ScreamFest 2009 Film Festival and it was fantastic. A very droll and bloody film, "Massacre" follows a whale watching expedition that goes all kinds of wrong. The synopsis makes it appear like it will be "Texas Chainsaw Massacre" on a whaling vessel, but it’s much more than that. Plenty of splatter to go around, but made with great humor.

My wife and I briefly chatted with director Julius Kemp who was extremely polite and revealed that they indeed created the movie after coming up with the title as I guessed. The film is currently hitting the film festival circuit, so catch it if you can. There’s no current distribution for the U.S., though it has been sold overseas in the U.K. and other countries.

With "Let the Right One In," "Dead Snow," and now "Reykjavik Whale Watching Massacre," Scandinavia is becoming a force to be reckoned with in the world of horror film making. Bravo.

Storyline:A detective deals with the loss of his own son while trying to uncover the identity of a boy whose mummified remains are found in a box buried for fifty years.User Reviews: Stolen is a good mystery movie.If ...

Storyline:On September 11th, 2001, 38 planes headed to New York City were diverted to Gander, Newfoundland, Canada. A town of 9,000 took in 7,000 passengers for 4 days until American airspace reopened.User Reviews: A ...

Storyline:A young teacher is given the toughest classroom in the school. Based on the TV series.User Reviews: First of all this film is about a teacher who actively involves herself in her troubled student's lives, al...

Storyline:The story of Ida Dalser, who fell in love with the future Italian Fascist leader, Benito Mussolini, supported him while he was unemployed in the early 1910s, and married him, presumably around 1914. She bore...

Storyline:An adventure story about Robert, Teresa and Christy Childs, an aspiring author and his family who crashes their boat during a storm and become stranded on a small rocky island in the middle of a treacherous ...

Storyline:A mad scientist implants an electronic device into the brain of an injured soldier, which turns him into a psychotic killer.User Reviews: Don't ask me how I did it, but even though this is technically a botc...