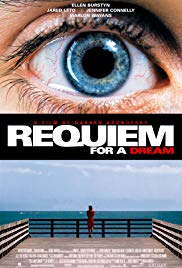 Storyline:
Sara Goldfarb (Ellen Burstyn) is a retired widow, living in a small apartment. She spends most of her time watching TV, especially a particular self-help show. She has delusions of rising above her current dull existence by being a guest on that show. Her son, Harry (Jared Leto) is a junkie but along with his friend Tyrone (Marlon Wayans) has visions of making it big by becoming a drug dealer. Harry’s girlfriend Marion (Jennifer Connelly) could be fashion designer or artist but is swept along in Harry’s drug-centric world. Meanwhile Sara has developed an addiction of her own. She desperately wants to lose weight and so goes on a crash course involving popping pills, pills which turn out to be very addictive and harmful to her mental state.
Written by
grantss
User Reviews: I went to this movie hearing plenty of buzz about how graphic the content was. Over the course of the movie you see just how Aronofsky wants to send his message to the audience. The characters start off with somewhat mild addictions and then next thing you know the four main characters are living in hell. I couldn’t believe how low they all fell. This movie may be the greatest anti-drug message of all time. I dare anybody to watch this and to not be touched and frightened by these characters. Before the movie started I noticed the audience was quite loud and garrulous, but as it ended and the credits rolled the whole place was stone cold silent. It was amazing.

As a whole I felt the movie was excellent. The visuals were well done and the editing was outstanding. The actors really put themselves into their roles. Jared Leto and Jennifer Connelly had very good chemistry, while Marlon Wayans showed he is a talented actor and not just a talented comic. Ellen Burstyn. Wow! She was amazing. I can’t believe an older woman would allow herself to be filmed like that. She has some serious guts. Hands down the best female performance I’ve watched this year, not even close. I was totally amazed by her.

All in all, I would say Requiem For a Dream is a great movie. It had a profound impact on me and I haven’t been able to stop thinking about it since I watched it on opening night. I definitely recommend this movie to anyone. This is a movie everyone should see, but unfortunately not enough will.