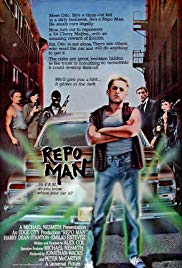 Storyline:
Frustrated punk rocker Otto quits his supermarket job after slugging a co-worker, and is later dumped by his girlfriend at a party. Wandering the streets in frustration, he is recruited in the repossession of a car by a repo agent. After discovering his parents have donated his college fund to a televangelist, he joins the repossession agency (Helping Hand Acceptance Corporation) as an apprentice “repo man”. During his training, he is introduced into the mercenary and paranoid world of the drivers, befriended by a UFO conspiracy theorist, confronted by rival repo agents, discovers some of his one-time friends have turned to a life of crime, is lectured to near cosmic unconsciousness by the repo agency grounds worker, and finds himself entangled in a web of intrigue concerning a huge repossession bounty on a 1964 Chevy Malibu driven by a lunatic government scientist, with Top Secret cargo in the trunk.
Written by
Baroque <[email protected]>
User Reviews: I’ve seen this movie more times than I know. Fifty at least, since I was able to find a copy two years ago. And I still don’t know what it all means. But I sure do love it anyways.

I suppose Repo Man was one of those essentials in the catalogue of must see punk movies. I think that’s where I first heard of it, as a punk science fiction movie. That explains why it’s such a crazy movie.

Emilio Esteves is down and out suburban punker Otto, wasting away in his little town with no way out. He just got fired from his crappy price tag job at some hoser supermarket. His girlfriend dumps him and hooks up with newly released convict, Duke, who, along with a punker named Archie make a hobby out of robbing stores. Plus, his friend Kevin is a total nerd. And his parents, perpetually brain dead from overexposure to the tv preachers, gave away the money they promised him, which would’ve helped him get out that dump.

Bud (played by super duper Harry Dean Stanton), a Repo Man, turns Otto on to the dangerous business of reposessing cars, which then becomes Otto’s new occupation and introduction to some pretty crazy sh!t. Aside from dodging bullets by angry debtors and the fierce competition among the Repo Men to obtain a high stakes Chevy Malibu, Otto is also turned on to some UFO conspiracies as weird scientists go searching for extra terrestrials. That town Otto lives in is one crazy place. There’s a lot going on, but it is so wierd, that it actually turns out to be good.

If you like punk culture movies, this is definitely one to try out. Plus, you get a slamming soundtrack with most of the songs performed by the Stooges and the Circle Jerks. The Jerks also appear as the lounge act in the bar, and the guy who plays Kevin, Zander Schloss, later joins the Jerks.