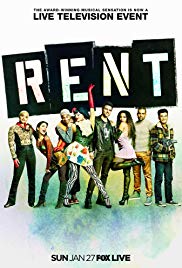 Storyline:
The story of several friends in New York City facing financial poverty, homophobia, AIDS, and, of course, rent.
User Reviews: These TV musicals are always a little sketchy. I’m not a "Renthead" so I don’t have much to go on. I saw the Broadway traveling company a few years ago and was quite captivated. Here, I felt the pacing was a bit slow. It is performed on an enormous stage, with the audience sitting in rectangular cells. This is a really touching story of the AIDS epidemic. It is about a sort of artists colony in a rental building. Many of the people there are HIV positive at a time when most would die from it. Others are drug users. Some are gay. They are all trying to survive. It is mixture of the angst that such a society would deal with, watching their young friends die off or lose their dreams. There is a nice moment at the end.