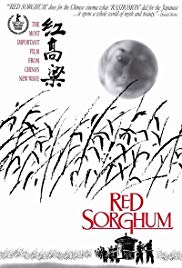 Storyline:
In 1930s China a young woman is sent by her father to marry the leprous owner of a winery. In the nearby red sorghum fields she falls for one of his servants. When the master dies she finds herself inheriting the isolated business.
Written by
Brian Rawnsley <[email protected]>
User Reviews: The much heralded renaissance of New Chinese Cinema can be an acquired taste to many Western filmgoers, but this handsome period piece (directed by the cinematographer of ‘Yellow Earth’, 1984) is livelier and more accessible than most. Part folk tale, part historical drama, it tells the story of a young virgin (sold by her father into marriage with a wealthy leper, in return for a mule), who after her husband’s mysterious death continues to run his successful vineyard, with help from her loyal wedding bearers. And yet for all its undeniable physical beauty and colorful action the film can be a dry experience, at least until the outbreak of the second Sino-Japanese War in the 1930s. With the Japanese occupation some emotional urgency finally breaks through the film’s mantle of reserve, which up to that point had marked even the more bawdy episodes of communal singing and drinking.

Storyline:After witnessing her lover, Gino being murdered by his jealous wife, Zena, Angela seeks refuge in a church where she encounters a young priest named Michael, who gives her sanctuary. But the killing was not ...

Storyline:Coerced by the evil Witch Raga, Ashura, the Hell Virgin, attempts to unlock the four Earth holes that lead to the Gates of Hell. Together, Raga aims to control the Earth. However, two monks skillful in magic...

Storyline:A gangster movie where all the gangsters are played by children. Instead of real bullets they use "splurge guns" that cover the victim in cream. The story tells of the rise of "Bugsy Malone" and the battle f...