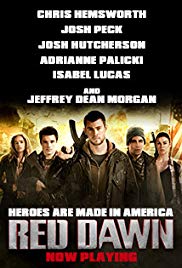 Storyline:
The city of Spokane, Washington is awakened by a North Korean paratrooper invasion. Marine Corps veteran Jed Eckert and his civilian brother, Matt, escape with a group of friends to an isolated cabin in the woods, where they witness the execution of their father at the hands of the ruthless Captain Cho. The brothers unite with their friends to form a guerrilla resistance group–the Wolverines–to drive the invaders from their home.
Written by
Claudio Carvalho, Rio de Janeiro, Brazil
User Reviews: The movie deliver what promises, it’s a regular entertaining action movie, the plot is believable as possible, they don’t explain too much about how the invasion of north-Korea to the states happened so its not about of how possible or by what means it could happen, the movie focuses on what happens after the invasion, from the point of view of a group of teenagers.

Besides of being forgettable, there’s just 1 big problem whit this movie, and is the casting, in particular Josh Peck, just seems that the part was too much for josh, he "performs" without any kind of acting skills, and looks fake all the time., he’s a really bad choose for a leading role.

Scooby-Doo and the Legend of the Vampire (Video 2003)

Storyline:On vacation in Australia, Scooby and the gang attend a music contest held at Vampire Rock---where the legendary 'Yowie Yahoo' Vampire is kidnapping the musical acts, including the Hex Girls. Masquerading as ...

Storyline:Mouser Jaune Tom and house cat Mewsette are living in the French countryside, but Mewsette wants to experience the refinement and excitement of the Paris living. But upon arrival she falls into the clutches ...

Storyline:Drama critic Larry McKay, his wife Kate, and their four sons move from their crowded Manhattan apartment to an old house in the country. While housewife Kate settles into suburban life, Larry continues to en...

Storyline:ROTPUNKT follows young German climbing phenom Alex Megos as he tries to repeat and establish the hardest single-pitch rock climbs in the world. The film explores the history of Frankenjura free climbing that...

Storyline:Heather is an attractive, competitive, sweet and sassy softball player who is used to winning, but she tends to strike out with guys once they find out she's not their type. Tyler is a competitive baseball p...

Storyline:In this urban crime thriller set against the dark and gritty backdrop of Chicago, a distraught and loving Wife, (Elise Neal), through a barrage of intense phone calls, must make a life-or-death decision to p...