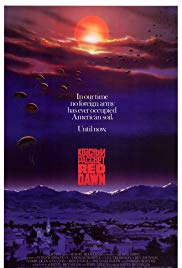 Storyline:
From out of the sky, Soviet, Nicaraguan, and Cuban troops begin landing on the football field of a Colorado high school. In a few seconds, the paratroopers have attacked the school and sent a group of teenagers fleeing into the mountains. Armed only with hunting rifles, pistols, and bows and arrows, the teens struggle to survive the bitter winter and the Soviet K.G.B. patrols hunting for them. Eventually, trouble arises when they kill a group of Soviet soldiers on patrol in the highlands. Soon they will wage their own guerrilla warfare against the invading Soviet troops under the banner of “Wolverines!”
Written by
Derek O’Cain
User Reviews: Man o man. This movie is great. As a history student its awesome to look back on these types of things and see what the buzz was around the time of the movie’s release. The plot is insane, acting over-the-top, but the historical commentary is amazing. People actually believed that such a thing as this was possible in the mid-80s, pre-Gorbachev. This is not "low-level propaganda," its the most obvious pro-American movie I have EVER seen.

On the movie alone, the "film" shouldn’t even rate. But as a Cold-War barometer, every interested person should see this to peer into the height of US-Soviet tensions.

Storyline:Dallas and heroin have one thing in common: Duncan always goes back to them. Six months ago, Duncan lost everything to heroin addiction: he spent time in prison, his wife took his daughters and left him, and...

Storyline:A group of friends sort out their turbulent life issues and love lives - always turning to one another to figure out their next move when jobs, romance or family interactions prove more complicated than they...

Storyline:In upstate New York in the 1850s, Abigail begins a new year on the rural farm where she lives with her husband Dyer. As Abigail considers the year to come through her journal entries, we experience the marke...

Storyline:How does some one with three strikes against her, rise to the highest court in the land, the U. S. Supreme Court?User Reviews:

Storyline:What do you do when you love music, and music doesn't love you back? It's a question that haunts Walt (Jim Tavaré), the owner of Essential Music, an indie record store in the heart of Silver Lake. Walt's all...

Storyline:Two strangers struggle to overcome insurmountable odds when they are suddenly faced with unimaginable powers and an unbreakable connection.User Reviews: