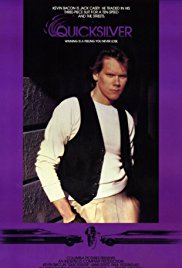 Storyline:
Jack Casey used to be a hot-shot stock market whiz kid. After a disastrous professional decision, his life in the fast lane is over. He loses his nerve and joins a speed delivery firm which relies on bicycles to avoid traffic jams of San Francisco, is attracted to a fellow bicycler, Terri, and befriends Hector, a budding entrepreneur. Can Jack regain his nerve and his self-respect, and rebuild his life on a more sound basis?
Written by
Reid Gagle
User Reviews: To be honest, it’s some years since I saw this movie, so have forgotten most of the story details. However, the film now seems rather obscure and apparently not very well regarded, so I wanted to put in my two cents worth of praise for a movie that, while it may not have been memorable, was certainly entertaining at the time.

The story revolves around a hot shot stock market whiz kid named Jack Casey, who loses not only his own money, but also all his parents’ life savings in a failed market deal / stock crash. Devastated by his failure, especially the effect it has on his father, he withdraws completely from the financial world, embarking upon a new career as a bicycle messenger. I enjoyed the unusual theme here, the disillusioned stock broker reverting to a simpler and (supposedly) more carefree lifestyle. Jack befriends his fellow messengers, including a guy, Voodoo, who’s involved with delivering the goods for a sleazy drug dealer, and also a girl named Terri, who of course becomes the love interest. Jack and Voodoo plan a bike race, but there’s trouble brewing from the drug dealer…

Other plot details? I don’t recall them, but Kevin Bacon is adept in the role of Jack, the story catchy enough, and the theme regarding the fleeting nature of wealth always relevant, particularly as related to the stock market. Also, although I’m not personally a cyclist, I quite enjoyed the dashing bicycle sequences, up and down and across the sometimes hilly streets, of (I believe) San Francisco. Don’t listen to the naysayers, it’s a perfectly entertaining way to spend a couple of hours, and not just for the 1980’s nostalgia.