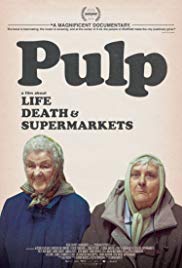 Pulp: A Film About Life, Death and Supermarkets (2014)

Storyline:
PULP find fame on the world stage in the 1990’s with anthems including ‘Common People’ and ‘Disco 2000’. 25 years (and 10 million album sales) later, they return to Sheffield for their last UK concert. Giving a career best performance exclusive to the film, the band share their thoughts on fame, love, mortality – & car maintenance. Director Florian Habicht (Love Story) weaves together the band’s personal offerings with dream-like specially-staged tableaux featuring ordinary people recruited on the streets of Sheffield. PULP is a music-film like no other – by turns funny, moving, life-affirming & (occasionally) bewildering.
Written by
Anonymous
User Reviews: As a native of Sheffield who lives overseas and an occasional Pulp admirer who met Jarvis Cocker while out drinking in Sheffield in 1985(at least I remember)! of course I enjoyed this film. It’s warm and rare portrayal of Sheffield and it’s people provided me with many ‘that was my life’ moments and much nostalgia. But this isn’t about me. The film aligns the band with ordinary working class, unassuming, self-deprecating people, the majority of Sheffield’s population I believe, the state-housed or working/lower-middle classes. Jarvis himself is from a different stratum of society but that needn’t matter. The film portrays those people sympathetically and allows their light to shine in a way that normally wouldn’t be revealed. The music is good – it’s Pulp. If you are interested in music documentaries, it’s worth a look.

Detective Conan: The Sniper from Another Dimension (2014)

Storyline:A sniper targets Shuichi Akai and shoots Masumi Sera. The citizens of Tokyo panic. Nothing is known about the mysterious sniper. Why was Masumi targeted? Will Shuichi survive? Will Conan be able to uncover t...