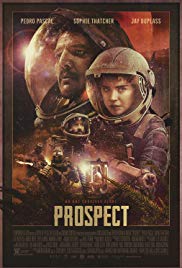 Storyline:
A teenage girl and her father travel to a remote alien moon, aiming to strike it rich. They’ve secured a contract to harvest a large deposit of the elusive gems hidden in the depths of the moon’s toxic forest. But there are others roving the wilderness and the job quickly devolves into a fight to survive. Forced to contend not only with the forest’s other ruthless inhabitants, but with her own father’s greed-addled judgment, the girl finds she must carve her own path to escape.
User Reviews: Typing on my phone just out of a film festival viewing so this is not going to be as detailed and organised as I would’ve liked. But the film deserves some rambling first impressions.

Many major science fiction releases from big studios in the past few years have been horribly cast mistreatments of lovely source material ( Valerian), angsty YA dystopians or wastes of opportunity (jupiter ascending).

Prospect is not a big waste of money, nor is it a waste of the audiences time. It’s a beautifuly we’ll crafted glimpse into an unknown future where humanity is still just as human as ever. It doesn’t utilise the power of its genre to force upon the audience the possible developments of current or imagined social or technological trends. It does however place it there somewhere subtly in the background and gives you the time to pick up the details and read between the lines.

The world building of the expanded universe is beautifully crafted by the props department, and even if costumes do sometimes leave something to be desired, a lot has clearly been achieved with limited means. Along with some cleverly written dialogue with unique speech patterns for each character lets you know of a larger world and richer characters outside of the little scenario we’re witnessing

The story of a few cast-away individuals scurrying amongst the dregs of a formerly booming prospecting industry on a soon to be abandoned moon is held together by a simple selection of location scenery. Whenever the relatively slow pacing of the film could let you get bored with the repetitive landscape, a powerful vista of the gas giant the green moon is orbiting reminds you how alien everything really is.

Sophie Tacher delivers a very convincing performance as the young girl afraid to be stranded in a corner of the galaxy soon to be forgotten while Pedro Pascal does a calm delivery of his charmingly unsympathetic rouge.

The score is well crafted, but at times I miss a more aggressive sound.

The high score I’ve given it isn’t because this is the best out there, but because it is pretty much as good as a space-western low budget indie can hope to be while preserving the mold.

Storyline:In 1458, five years after the fall of Constantinople to the Moslems, eighteen cardinals meet to elect a new pope. Rodrigo Borgia, a 27 year old cardinal learns to play a very dangerous game.User Reviews: