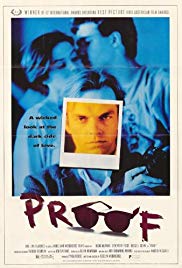 Storyline:
Black comedy about a blind man, Martin, who takes photographs as “proof” that the world really is as others describe it to him. The film explores his antagonistic relationships with Celia, who cleans and cooks for him and habitually rearranges the furniture in the house, and with Andy, a mate he thinks he can trust.
Written by
Anonymous
User Reviews: Having noticed a film crew shooting in the gardens at the end of my street, I eventually realized the film was "Proof". I thought I better check it out, and was pleasantly surprised with the result.

I knew little about either Hugo Weaving or Russell Crowe at the time and thought they were both very good in it, especially Weaving. Like most Australian movies it was filmed on a low budget, and on this occasion produced very good results.

If you enjoyed this for reasons other than the "Crowe Factor", you should try some other Aussie films.

Storyline:'Every day is another day closer to the day I'll never have to do this again.' Five women, one restaurant, one night, one birthday, one breakdown. Then the phone rings. A famous actor is coming for dinner. I...