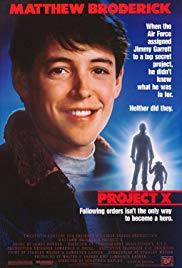 Storyline:
A young inductee into the military is given the task of looking after some chimpanzees used in the mysterious “Project X”. Getting to know the chimps fairly well, he begins to suspect there is more to the secret project than he is being told.
Written by
Murray Chapman <[email protected]>
User Reviews: Jimmy Garrett wants to be an air force pilot but taking his girlfriend up in a jet while drinking champagne was not a move that seems likely to aid that career goal. That little stunt sees him bust down to helping in a special pilots project (Project X) which he hopes will see him trained up to be a pilot but really sees him looking after chimps who are being trained as pilots for some reason. Jimmy takes to the job once he befriends chimp Virgil, who appears to have been taught sign language. Things are good and Jimmy’s technique benefits the programme until, that is, the painfully naïve chap learns the aim of project x.

Very much aimed at a young teen audience, this film is a solid family drama with a conscience and a message about animal testing. The basic plot is pretty obvious but it is effective in drawing the audience in with humour and of course the fact that monkeys are legally very cool and cute. I doubt anyone watching is as naïve as Jimmy and most viewers will see the obvious plot development long before it is revealed and from there it continues along a fairly predictable path. It is to its credit though that it is still quite engaging, exciting and touching despite this simplicity and older children will eat it up. It does have a message about animal testing but don’t expect it to be balanced or weigh up pros and cons or anything like that because this very much has its Disney agenda. It is still sweet family fare though but it does take a lot of swallowing in both the simplicity of the message and the high-concept of the plot.

Broderick takes billing after all the monkeys which I suppose is only right. He is solid and works well with the chimps but the film is not his by any means. No, the film belongs to Willie (Virgil), Okko (Goofy) and the others. Virgil in particular is expressive and very well trained  in fact trained to the point that he does convince as the character he plays. Support is basic by comparison but still does the job. Sadler does his usual bad guy shtick while McGee, Stark and Hunt are all solid for what they have to do.

Overall then a basic but enjoyable family film that is simplistic on all levels but is cute, sentimental and quite dramatic. Probably not anywhere near good enough to stand up to viewings by discerning adults but it will make for a good family film if you have older children.

Storyline:The film follows the relationship between a bullied student, Shelly, whose home life is in shambles, and a wealthy eccentric, Wes, with no friends and issues with women. Things take a turn when Wes offers to...