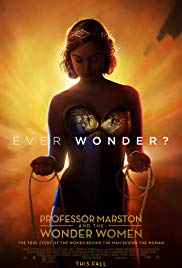 Professor Marston and the Wonder Women (2017)

Storyline:
Details the unconventional life of Dr. William Marston, the Harvard psychologist and inventor who helped invent the modern lie detector test and created Wonder Woman in 1941. Marston was in a polyamorous relationship with his wife Elizabeth, a psychologist and inventor in her own right, and Olive Byrne, a former student who became an academic. This relationship was key to the creation of Wonder Woman, as Elizabeth and Olive’s feminist ideals were ingrained in the character from her creation. Marston died of skin cancer in 1947, but Elizabeth and Olive remained a couple and raised their and Marston’s children together. The film is said to focus on how Marston dealt with the controversy surrounding Wonder Woman’s creation.
User Reviews: Wonder Woman was a hit as a comic book in the past and recently a hit at cinemas around the world, so if this story was going to hit the mainstream, it only makes sense that now’s the time. It seems as though more and more true stories are being made into films, and this may just be for me personally, but unique and original films seem to be dwindling down and more sequels and remakes taking their place. I believe that filmmakers choose to make true stories nowadays because the lack of original or interesting content is hard to come by, so things that have happened out in the real world seems like a safe bet that people will find enjoyable, for the most part. Quite frankly, I just thought Wonder Woman was made by a man who liked superheroes, but there’s much more to it than that. If you wish to be intrigued by a story that’s consistently surprising, then Professor Marston and the Wonder Women may just be the film for you.

William Moulton Marston is the original author of the Wonder Woman stories, even though many of the books he wrote used the pseudonym Charles Moulton. Living a life as a professor, he became infatuated with one of his students. His wife sharing the same affections toward her lead to a love triangle between the three of them. William discovering that their traits made up the perfect woman, this lead to the creation of the character we all know and love today. Being a much more sexualized character in the past, things began to spiral out of control for this family.

I loved watching this movie, but I also found myself wanting more in terms of how it was telling this story. I felt as though it was taking me through the motions rather than coming up with a clever way of telling its story. Yes, it has come clever editing techniques in the way that it goes back and forth through multiple periods of time, and even though the editing style was easily the stand out to me here, it wasn’t enough to completely suck me in. Where I feel this film shined was in it’s casting.

Luke Evans has always impressed me, whether it’s an appearance as a generic villain in Fast & Furious 6 or showing his musical talents in Beauty and the Beast just to name a couple, I’ve always seen him as someone who could be a real household name one day. This is definitely one of his most subtle performances, but the way he hid his accent and played off of each actress/actor. Rebecca Hall is wonderful as always and upon looking up Bella Heathcote’s acting credits and seeing that she appeared in movies like In Time and Fifty Shades Darker and still having no clue who she was until now made me think that she wouldn’t be memorable, but I can see her starring in her own film in the coming years. She came off as a very likable woman here and I can’t wait to see more of her.

In the end, Professor Marston and the Wonder Women uses a lot of techniques that countless other films do in recent years so that was quite the downfall to me, considering the subject matter was so risqué and intriguing for a modern audience, given our present climate. It’s not going to be for everyone, due to the fact that the story itself may turn viewers off, but it’s a true story that I’m sure many would like to discover. Overall, an impressive movie about the invention of a lovable character that has gone quite a bit under the radar, which is a shame.

Storyline:A passionate youngster who dreams of making it in the music industry is on the verge of losing his love. What will happen to his career and romance?User Reviews: