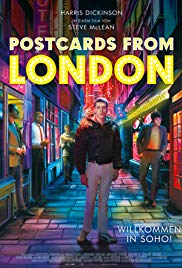 Storyline:
A stylish, sexy film about a young man’s journey into an unusual form of escort work, set in an imaginary vision of London’s Soho.
User Reviews: The film will not get widespread acclaim as it is a classic, non-classic, arty film in the same way that Betty Blue, Withnail & I, Donnie Darko, Jonny Suede and Cool World were.
It’s a showcase for the undoubted talents of Harris Dickinson, a man who exudes charm and emotion – also in real life, which will get him far in a transition from indie to mainstream.
Keep an eye out for him.

Storyline:A family-values man named Jerry Blake (Terry O'Quinn) marries widows and divorcées with children in search of the perfect family. As soon as his new family members show signs of being human and not robots wh...