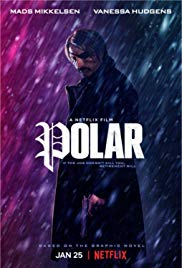 Storyline:
The world’s top assassin, Duncan Vizla, is settling into retirement when his former employer marks him as a liability to the firm. Against his will, he finds himself back in the game going head to head with an army of younger killers.
User Reviews: What we have here is the typical hitman who wants to retire at a peaceful place but unlike the usual stuff where our hitman’s wife/girlfriend gets killed or where he is pulled into the ugly job cos of saving some small girl.
The concept here is about retired hitmen becoming the target n after the initial opening scene of Knoxville getting wasted, we r introduced to Mikkelsen , who is offered a one last job few days before his retirement n it doesn’t take time for him to finish the job n sense that it was him who was the target.
Mikkelsen did a pretty good job. He did decent job with the action choreography n he is in good shape.
Is he obsessed with the eye patch? (Remember Valhalla Rising).
This film has lots of violent action scenes, machine gun scenes but nothing memorable cos we have seen it all before. Good amount of sex scenes with eye candy boobs.
The hallway fight scene reminded me of Iku Uwais’ films.
Equalizer, John Wick, Raid Redemption, Man from Nowhere, etc. We have seen it all but it doesn’t get stale if u can pull it off well n Polar succeeded in it.
A pretty enjoyable action flick.