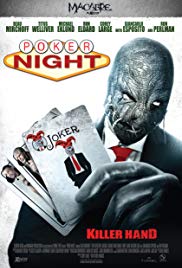 Storyline:
When you become a detective in Warsaw Indiana – you go to Poker Night, where you play against some of the best cops in the business. They tell you stories about their time on the job – their successes and failures. When new Detective Stan Jeter leaves the game, he is caught by a vicious psychopath and locked in a basement. Using the stories he heard at Poker Night, he must match wits against his captor – and save not only himself, but the young girl trapped in the basement with him. Like Seven and Usual Suspect, Poker Night combines thrills and twists and turns that will leave you guessing till the very end.
Written by
Anonymous
User Reviews: Poker Night is the name of the movie but there’s not a lot of poker being played in it if there are poker fans out there who might be thinking that this is another ROUNDERS (1998) or something, it’s not.

It does, just like poker, demand your very full attention to try to figure out what’s going on though.

I’d call it a mix between UNUSUAL SUSPECTS and SAW.

Before I saw it I was wondering why it was labelled a action-movie because the cover and plot summary suggested otherwise to me, but it gets clear quite quick why because even though there aren’t a bunch of shootouts or car-chases the pace of the movie is VERY fast.

You really need to have your thinking cap with this one it’s really not a movie for a late hangover where you just want relaxe your brain cause chances are you will lose the plot and miss a lot of subtle information that passes by, which happened a bit to me but I was able to pick up luckily but I think I might need to watch it at least one more time to fully grasp it.

Visually it’s gorgeously gritty and acting is fine overall, well worth seeing for sure even though yes it’s hard to keep up at times.