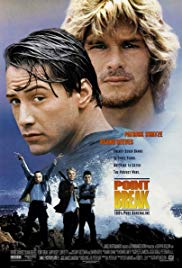 Storyline:
In Los Angeles, California, a gang of bank robbers call themselves The Ex-Presidents. commit their crimes while wearing masks of ex-Presidents Reagan, Carter, Nixon, and Johnson. The F.B.I. believes that the members of the gang could be surfers, and send young Agent Johnny Utah undercover at the beach to mix with the surfers and gather information. Utah meets surfer Bodhi, and gets drawn into the lifestyle of his new friend.
Written by
Sami Al-Taher <[email protected]>
User Reviews: Katheryn Bigelow’s 1991 action thriller "Point Break" is still a ground-breaking film of the early nineties. It tells the story of the cop John Utah (Keanu Reaves) hunting a bunch of bank robbers camouflaged with masks of the former U.S. presidents. His investigations leads to a group of surfers and extreme sports worshippers, and the cop becomes fascinated by the free-style philosophies and adrenaline rushes of the gang around the charismatic leader Bodhi (Patrick Swayze). Their close friendship changes to a hard-fought rivalry at the end when cop and gangsters face point blank.

Bigelow uses typically American surf beach settings for this unusual and very stylish action thriller with great stunts like parachuting scenes, bank robberies, a car chase, police raids, martial arts, breath-taking chases and brilliantly photographed surf sequences. Watch out for the Red Hot Chillie Peppers as a gang of brutal surf nazis beating up Keanu Reeves and being captured by him during a hard-fought police raid.

But "Point Break" is even more than that – it also shows the lifestyle of the nineties in many ways. Bodie and his gang are a group of New Age-like grunge guys reaching out for the most extreme adrenaline experiences. They stand for the new style of extreme/fun sport worshippers, ravers and new spiritualists of the post-yuppie era in the nineties who don’t care about wealth and status symbols but for fun, action, breaking the limits and finding the sum of all senses. "Point Break" is not only a well-done example of modern action entertainment without computer-generated special effects but also a very philosophical and spiritual study of society in the nineties.

Storyline:To protect Japan from yet another monster attack, this time from a new and malevolent member of the Godzilla (Gojira) species, the Japanese government creates a human-piloted cyborg, codenamed Kiriyu, using ...

Storyline:An Indian prince leaves his world of comfort and riches behind to wander and meditate for six years in search of spiritual enlightenment. Siddartha turns his back on the old religion when people are starving...

Storyline:Kenji Koiso, an eleventh grade math genius, agrees to take a summer job at the Nagano hometown of his crush, Natuski. When he arrives, he finds that her family have reunited to celebrate the 90th birthday of...

Storyline:In Japan, the vampire-hunter Saya, who is a powerful original, is sent by her liaison with the government, David, posed as a teenage student to the Yokota High School on the eve of Halloween to hunt down vam...