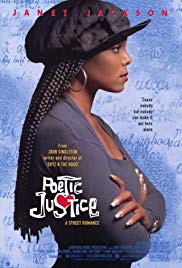 Storyline:
After witnessing the murder of her first and only boyfriend, young Justice decides to forget about college and become a South Central Los Angeles hairdresser. Avoiding friends, the only way for her to cope with her depression is by composing beautiful poetry. On her way to a convention in Oakland, she is forced to ride with an independent-minded postal worker whom she has not gotten along with in the past. After various arguments between them and their friends, they start to discover that their thoughts on violence, socially and domestically, are the same. Justice may finally feel that she is not as alone as before.
Written by
<[email protected]>
User Reviews: Okay, I’ll be the first to admit that this is nowhere near as good as Boyz in the Hood, however, it’s not as bad as some make it out to be. The acting is somewhat lacking, but the story as a whole is moving. If you’re a diehard Singleton fan, or are just in the mood for a pretty decent movie, go for it, you’ve got nothing to lose.