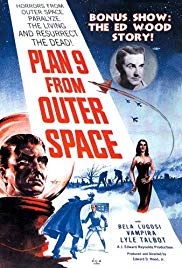 Storyline:
In California, an old man (Bela Lugosi) grieves the loss of his wife (Vampira) and on the next day he also dies. However, the space soldier Eros and her mate Tanna use an electric device to resurrect them both and the strong Inspector Clay (Tor Johnson) that was murdered by the couple. Their intention is not to conquer Earth but to stop mankind from developing the powerful bomb “Solobonite” that would threaten the universe. When the population of Hollywood and Washington DC sees flying saucers on the sky, a colonel, a police lieutenant, a commercial pilot, his wife and a policeman try to stop the aliens.
Written by
Claudio Carvalho, Rio de Janeiro, Brazil
User Reviews: While it thoroughly deserves its reputation as a film only worth seeing so that you can enjoy its remarkably amateurish production, on the other hand it seems a bit unfair to label "Plan 9 From Outer Space" as the worst film ever made. Most of it is quite watchable, it’s not at all offensive, and the story – utterly ridiculous as it is – moves fairly quickly, and gives you some reasons to stick around to the end. Those qualities put it well ahead of a great many movies that cost a lot more to make and that involved many more recognizable names than you’ll find in this cast.

To be sure, almost everything about it is of amazingly poor quality, from the incompetent directing and acting to the slipshod special effects to the dialogue that produces countless unintentional laughs. The story is goofy, and uses ideas and devices that lack credibility even by sci-fi standards. Everyone who watches it has their own list of favorite examples of this film’s complete ineptitude.

If you have any interest in old movies, you should see this if you have the chance, as long as you can do so without paying for the privilege. It says something that so many viewers are still talking about it over 40 years after it was made, which is a lot more than will ever be said about most of the movies you could see in a theater today. Whether you will ever want to watch it again is an entirely different question, although there are those who have managed to enjoy watching this several times. Take a look for yourself and see what you think about this classic example of inept film-making.