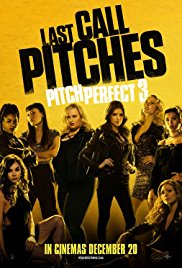 Storyline:
After the highs of winning the World Championships, the Bellas find themselves split apart and discovering there aren’t job prospects for making music with your mouth. But when they get the chance to reunite for an overseas USO tour, this group of awesome nerds will come together to make some music, and some questionable decisions, one last time.
User Reviews: ‘PITCH PERFECT 3’: Two and a Half Stars (Out of Five)

The third film in the comedy/musical trilogy about a young women a cappella group, called the Barden Bellas (from Barden University). In this (supposedly) final installment, the girls reunite (years after they graduated) for one final singing competition, at a USO tour overseas. Anna Kendrick, Rebel Wilson, Anna Camp, Brittany Snow, Hailee Steinfeld, Hana Mae Lee, Ester Dean, Alexis Knapp, Elizabeth Banks and John Michael Higgins all reprise their roles from earlier films. While Ruby Rose, John Lithgow, Andy Allo, Matt Lanter and DJ Khaled join the cast. It was directed by Trish Sie (who also helmed the 2014 musical/dance flick ‘STEP UP ALL IN’), and it was written by Kay Cannon (who also wrote the first two movies) and Mike White (who also wrote the 2003 musical/comedy flick ‘SCHOOL OF ROCK’). The film has received mostly negative reviews from critics, and it’s performed modestly at the Box Office. I found it to be mostly a bore, and unamusing, but I did highly enjoy the first two movies.

Years after graduating from Barden University, and winning the world championship, the Bellas get back together at their friend’s, and former Bella (Steinfeld), show. There they reminisce, and talk about how they miss singing, and that each of their lives have not turned out the way they had hoped. The girls then decide to accept an invite to perform at the USO tour overseas, with other musical groups. Once there they find out that the show is also a competition, and the Bellas get very intensely involved in this competition once again.

Every time a ‘PITCH PERFECT’ movie comes out, I’m never eager to see it, because I don’t think I’ll really like it that much. I was pleasantly surprised with the first two movies, and I actually gave them each 4.5 star ratings (because they’re great ‘feel-good’ musicals actually). So I had higher hopes for this one, but the trailers still didn’t sell me on it, and I was definitely not pleasantly surprised with it (when I did see it, on opening night). I really wish they would have stopped after 2!