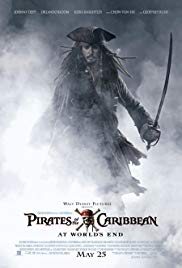 Storyline:
After Elizabeth, Will, and Captain Barbossa rescue Captain Jack Sparrow from the the land of the dead, they must face their foes, Davy Jones and Lord Cutler Beckett. Beckett, now with control of Jones’ heart, forms a dark alliance with him in order to rule the seas and wipe out the last of the Pirates. Now, Jack, Barbossa, Will, Elizabeth, Tia Dalma, and crew must call the Pirate Lords from the four corners of the globe, including the infamous Sao Feng, to gathering. The Pirate Lords want to release the goddess Calypso, Davy Jones’s damned lover, from the trap they sent her to out of fear, in which the Pirate Lords must combine the 9 pieces that bound her by ritual to undo it and release her in hopes that she will help them fight. With this, all pirates will stand together and will make their final stand for freedom against Beckett, Jones, Norrington, the Flying Dutchman, and the entire East India Trading Company.
Written by
ahmetkozan
User Reviews: The Pirates of the Caribbean-movie serials is probably one I’ll never grow tired off. The characters are fun and great, always adventurous and spectacular to watch.

It’s really too bad that this time they felt the need to make things even bigger, more complex and conclusive than the previous two movies. Really not needed. In my opinion the first movie "Pirates of the Caribbean: The Curse of the Black Pearl" is still the best because of the reason that it’s simple, fun and choices to be purely entertaining. They already went wrong with this approach during the second movie; "Pirates of the Caribbean: Dead Man’s Chest", when they put in more new characters and different hard to follow plot lines. "Pirates of the Caribbean: At World’s End" goes on in the same trend as the previous movie. There are more new characters and as far as the new many plot-lines are concerned…well let me just say that after a while I just gave up trying to understand the movie and just let the movie take me away with its visuals, humor and other entertaining elements. And this movie regardless should really be able to take you away on a roller-coaster-ride of pure entertainment.

No doubt in my mind that this movie could had become the best one out of the series. It had all the potential and budget for that, now if they had only cut down about halve of the script…Most of the plot-lines seem redundant and are actually far from believable because they contradict from what happened in the first two movies. The many betrayals among characters and side-picking became really confusing after a while, till it reached a point when you just didn’t knew who was fighting for what. But like I said before, after a while you just stop caring about it and simply enjoy the movie for what it brings you. It all is also the reason why the movie is now nearly 3 hours long. Now the movie is not as good and entertaining as the first but maybe just slightly better than the second one, because of the large scale of this movie.

The movie is definitely big. There is no lack of action as some people claim there is. There is just as much action as there is in the first two movies, only difference this time is that the movie is nearly 3 hours long and therefor the movie also has some more talking-sequences and slower moments in it.

The movie is also big with its musical score by Hans Zimmer and he actually succeeded in composing a new great theme for the movie. In its action moments the movie gets definitely uplifted by its musical score.

The action sequences are definitely well constructed and at times pure eye candy. So are the special effects, although I feel that the second movie was still better on that. It seems like they tried to overdo things this time and I’m mainly talking about the end battle, when it comes down to its special effects, by putting in some complex shots. No matter how good CGI is these days, you still see that it’s CGI.

Most roles get extended in this movie. Marty, Tia Dalma and even Jack the monkey and Cotton’s parrot. But of course the movie still remains the Jack Sparrow-show. Really one of the best characters in recent years, all thanks to Johnny Depp, who provide the movie with its biggest laughs and most hilarious absurd moments. He still plays the character as good and fresh as he did for the first time 4 years ago. You can’t just ever grow tired of Jack Sparrow. I was also very pleased to see Geoffrey Rush back as Barbossa. His role was bigger which allowed Geoffrey Rush to shine even more. Bill Nighy was also as good as always as Davy Jones. Orlando Bloom’s and Keira Knightley’s acting also has really improved over the years. I was actually surprised to see how much of the movie Keira Knightley carries this time and how well she does this. Even in the sequences with Geoffrey Rush she does. She also gets to do more interesting in the movie when it comes done to action. In a way she has taken over the Will (Orlando Bloom) role in this movie this time and Will himself gets pushed more to the background this time compared to the first two movies, which really shouldn’t bother most people, unless you’re a teenage-girl of course. She handles both the action- and comical sequences really well. And even Keith Richards shows up in an already classic cameo as Jack’s father. But some role also got narrowed down to my regret, such as Jonathan Pryce’s and Jack Davenport’s and lets not forget the Kraken.

Still, I really wouldn’t mind seeing more Pirates of the Caribbean movies in the future, if needed with new actors and characters, as long as Johnny Depp stays as Jack Sparrow. The serials still have more than enough potential and haven’t dried up yet.