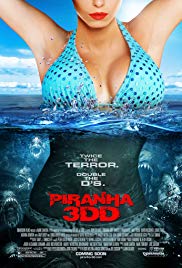 Storyline:
Having awoken from their spring break extravaganza at Lake Victoria, the swarm heads upstream where they look to make a meal out of Big Wet, a local water park where when it comes to fun, nobody does it wetter! Though they came to get wet, get loaded and get some, the staff and patrons get more than they bargained for when they must face the fiercest, most bloodthirsty piranhas yet. Lead by the strong-willed, studious Maddy and her friends, Barry and Kyle, the trio must dive in and take on these man-eating creatures using every ounce of their being but can they be stopped?
Written by
bs7162
User Reviews: The first Piranha surprised audiences in 2010 with its wit, over the top nudity, and excessive gore. It never took itself seriously and had a solid cast. This follow-up to the 2010 movie is just honestly embarrassing. It had all the elements that the first movie had, but everything goes horribly wrong with incompetent direction, laughably bad acting and dialogue, and some of the cheapest gore effects I’ve ever seen.

Why is this movie so bad? Let’s start with the plot – there is none. If you can buy the premise that piranhas are going to go in underground lakes and somehow end up in a water park swimming, well then I have a bridge to sell you as well. The characters are all terrible. The one couple in the van early on exists only to die, no other purpose, no even attempted development. Yet later we see other characters mourning their disappearance, only it’s forgotten 5 minutes later. The one scene that people will probably remember involves a girl that had a piranha swim up her lady parts (and somehow survive) only to bite her boyfriend’s penis during intercourse. Trying to be inventive there, but really just shows the lack of any restraint with this movie. But even if you think the plot and acting are atrocious, at least there will be good gore, right? Wrong. The gore effects can be described in one word: cheap. The special effects with the piranhas are terrible too – you wonder where they spent $20 million on this movie. Not to mention, the inevitable massacre scene is shot so poorly that it has zero coherence and lacks any punch. It looks like they just poured some red dye in the pool and hired a few extras to flop around. The massacre scene in the first film had some of the best gore effects I’d ever seen. This is a joke of a follow-up.

So which actors disgraced themselves for a paycheck? There is a cameo by David Hasselhoff where he’s basically mocking himself, but you have to wonder what is going through his head when his character mutters "Welcome to rock bottom." I wonder if the irony is lost on this man. David Koechner is just obnoxious and terrible. Jerry O’Connell played this type of character way better in the first film. Every time Koechner was on screen, I was just wanting him to get killed off already.

And also surprisingly, we don’t even get any good nudity. All the extras they hired for this movie look like washed up strippers. None of the cute female leads goes topless. Maybe they ran out of budget and couldn’t pay them enough to do it.

I have a feeling that 95% of the people involved in this film will ever have meaningful work in Hollywood again (thankfully). Don’t waste your time.