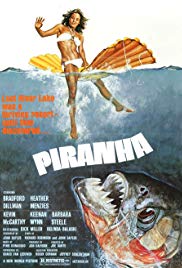 Storyline:
When flesh-eating piranhas are accidentally released into a summer resort’s rivers, the guests become their next meal.
Written by
Concorde – New Horizons (with permission).
User Reviews: RELEASED IN 1978 and directed by Joe Dante, "Piranha" chronicles events when genetically-enhanced piranha are accidently released into a river system in central Texas, which threaten kids & counselors at a Summer Camp and vacationers at a lake resort. A spirited skip tracer (Heather Menzies) and a backwoods drunkard (Bradford Dillman) team-up to save the swimmers. Kevin McCarthy and Barbara Steele play military scientists who experimented with the escaped piranha.

While "Piranha" is sort of a "Jaws" (1975) knockoff, it’s different enough to not be a rip-off: The story takes place in a river system deep in the mainland and not the ocean; the ‘monster’ consists of teams of little vicious fish rather than a huge Great White Shark; the beach sequences involve quaint campground-like beaches rather than major ocean beaches; unlike "Jaws," there’s a focus on alluring young women, although "Jaws 2" (1978) delivered the goods in this area as well; there’s more of a sense of adventure and even suspense; and the tone mixes-in amusing elements with the horrific mayhem.

As inferred, the picture is highlighted by several quality females with curvy Belinda Balaski (from "The Howling") and cutie Melody Thomas Scott (from The Young and the Restless) featured in prominent roles. Moreover, voluptuous Janie Squire has some worthy screen time in the prologue. There are superb women in the periphery as well. Interestingly, the 2010 quasi-remake, "Piranha 3D," took the sleaze route with loads of nudity, but the women are ironically hotter here, not to mention the film’s all-around more entertaining.

THE MOVIE IS LEAN and filler-free at 93 minutes and was shot along a river near San Marcos in the heart of Texas, Northeast of San Antonio. WRITERS: John Sayles and Richard Robinson.

Storyline:After the destruction of the Twelve Colonies of Mankind, the last major fighter carrier leads a makeshift fugitive fleet in a desperate search for the legendary planet Earth. This film is adapted from a tele...

Storyline:A feature documentary about the enduring appeal of the character King Kong, and how he has inspired so many of the great filmmakers and artists since 1933.User Reviews: