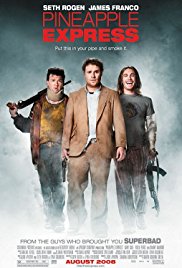 Storyline:
Lazy court-process clerk and stoner Dale Denton has only one reason to visit his equally lazy dealer Saul Silver: to purchase weed, specifically, a rare new strain called Pineapple Express. But when Dale becomes the only witness to a murder by a crooked cop and the city’s most dangerous drug lord, he panics and dumps his roach of Pineapple Express at the scene. Dale now has another reason to visit Saul: to find out if the weed is so rare that it can be traced back to him–and it is. As Dale and Saul run for their lives, they quickly discover that they’re not suffering from weed-fueled paranoia: incredibly, the bad guys really are hot on their trail and trying to figure out the fastest way to kill them both. All aboard the Pineapple Express.
Written by
Anonymous
User Reviews: There’s no doubt about it, Pineapple Express is a relentlessly funny stoner movie, start to finish with little in the way of compromise; telling the story of two stoners, who end up entangled within a drug conspiracy plot that threatens their lives while smoking plenty of pot along the way, this year’s latest instalment to the genre is the finest example of dumb -but well delivered- comedy yet. One discrepancy against it’s classification as a stoner comedy however lies in that even if you’re not high yourself; even if you’ve never even been high in your life, there’s still lots of fun to be had here as the jokes are broad enough in their design to apply to any ridiculous situation. So while the plant obviously makes a starring role here, the focus is not primarily on it, and the movie is better off as a result.

So far this year we have been treated to an unusually high dosage of stoner comedies, with Pineapple Express being a late third behind the too-dumb-for-it’s-own-good Strange Wilderness and the dumb-but-fun Harold & Kumar. However, despite coming in late to the game, the old expression of "saving the best ’till last" seems applicable here. Where previous instalments from this year combined the dumb with surreal through incoherent situations obviously dreamt up from people who were under the influence at the time, Pineapple Express feels silly, but not the extent where the entire feature boils down to caricature comedy. Here the writers take two characters, start them off one place and take them on an adventure not just through crime, car-chases, comical fight scenes and little personal squabbles, but through themselves. It’s a combination which could have had a disastrously polarising effect, but the writers get it spot on here.

Main characters Dale Denton (Seth Rogan) and Saul Silver (James Franco) may have alliterative names akin to comic book heroes, but they’re certainly not of that kind. Instead, they deal with drugs; Saul is Dale’s supplier, and as much as Saul would like to think of Dale as a buddy, Dale wants nothing else to do with him outside of the service he provides. However, after Dale witnesses a murder involving some drug-dealer crimelords, the two are forced to embark on a journey that will have them at odds with each other whether they like it or not. What results of this is a story of friendship, and while the unlikely premise of these guys not exactly getting along does seem a bit shifty, the chemistry between Rogan and Franco is superb enough to allow their characters plenty of growing. To be sure, this isn’t a hallmark drama, there are no grandeur statements and no tears are provoked from director David Gordon Green but that’s what makes it lovable; it’s a story about two regular guys, who get into crazy shenanigans, smoke weed and crack some jokes. It’s not enlightening per se, but it’s entertaining, and down to earth.

This is where Pineapple Express begins to take the lead in front of its predecessors, as it actually attempts to tell a compelling story with an undoubtedly overblown amount of action, but with grounded drama to bear the weight of its fabrications. Through this fusion of solid characterisation with a ridiculous but conceivable action-packed plot, the film succeeds in creating an engagingly entertaining experience that doesn’t just provide excitement and memorable characters, but also manages to tickle the funny bone just as frequently.

Coming from the three guys who last year blessed the screen with the hilarious Superbad, Pineapple Express is a riot start to finish, combining lots of blunt dialogue with slapstick and farce to great effect in ways which made the aforementioned creation as funny as it was. It has to be said that this time around, the pacing isn’t quite as tight, and the script’s insistence on some scenes’ ability to sustain laughter is a little off, and this in turn leads to the movie’s only real technical fault. In such moments, jokes will be drawn out for long stretches of time, losing momentum, yet thankfully such scenes are far and few between, and with the pace heightening the more film reaches the conclusion; the frequency sharply decreases with time. Nevertheless, if you don’t mind profane dialogue, blunt jokes and plenty of passive violence used mainly for comic effect, then Pineapple Express should please any desire for laughter that you may have.

And that’s all it basically comes down to, but what else were you expecting? As a movie, Pineaple Express is an entertaining and at times sweet take on friendship based around two very down to earth characters that most people should be able to relate to in some way or another. As a duo, Rogan and Franco are extremely well matched, with the interplay between the two coming off as naturally comical and aptly delivered to the point of satisfying the movie’s biggest pulling point and focus. With some great action scenes tinged with plenty of comedy, all revolving around some memorable characters portrayed by enthusiastic, suitably cast performers who end up within a plot which is admittedly hammy, but fun all the same; Pineapple Express is good for many things, but the thing that it does best is in making you laugh, and it does so with enough frequency to make this one of this year’s greater comedies.