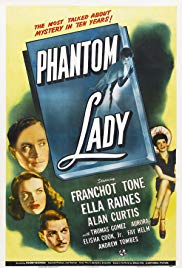 Storyline:
Unhappily married Scott Henderson spends the evening on a no-name basis with a hat-wearing woman he picked up in a bar. Returning home, he finds his wife strangled and becomes the prime suspect in her murder. Every effort to establish his alibi fails; oddly no one seems to remember seeing the phantom lady (or her hat). In prison, Scott gives up hope but his faithful secretary, “Kansas,” doggedly follows evanescent clues through shadowy nocturnal streets. Can she save Scott in time?
Written by
Rod Crawford <[email protected]>
User Reviews: I found this film noir to be odd in that the beginning and the end were both lousy but the middle part was excellent. The "lousy" parts are such because they drag on and are simply boring when they don’t have to be. The immediate opening scenes are fine, showing an innocent man, "Scott Henderson" (Alan Curtis) being charged and found guilty of a murder he didn’t commit….but then almost nothing happens for the next 20 minutes.

Then comes the good part when Henderson’s secretary "Carol ‘Kansas’ Richmond" (Ella Raines) gets involved, taking it upon herself to find the missing woman who could prove that her boss was innocent. During her pursuit we meet a couple of very interesting characters and we see some outstanding film-noir photography.

The most interesting character, "Cliff," was played by film noir regular Elisha Cook Jr. He has one scene in which he takes Raines to a local warehouse-type room where his jazz band is practicing. Cook then shows off with this drum playing and it is so frenetic, so bizarre that it is almost shocking to watch. You have to see it, to appreciate it. It’s a small, insignificant scene but very memorable. A few other minor characters are a bit strange, too.

Thomas Gomez plays a cop ("Inspector Burgess") who winds up helping Raines a bit, and he’s good to watch, too.In the end, Raines discovers what’s up and is in peril herself. That scene has suspense but is too drawn out. It’s like, "okay, already…..let’s go on with it!"