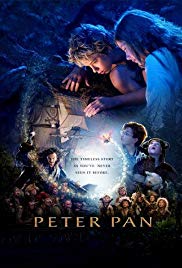 Storyline:
In stifling Edwardian London, Wendy Darling mesmerizes her brothers every night with bedtime tales of swordplay, swashbuckling, and the fearsome Captain Hook. But the children become the heroes of an even greater story, when Peter Pan flies into their nursery one night and leads them over moonlit rooftops through a galaxy of stars and to the lush jungles of Neverland. Wendy and her brothers join Peter and the Lost Boys in an exhilarating life–free of grown-up rules–while also facing the inevitable showdown with Hook and his bloodthirsty pirates.
Written by
Sujit R. Varma
User Reviews: By Bradley A. Draper

One must see this movie with an innocent, to glean the full joy of this precious childhood fantasy in film. I had that privilege with my seventeen year old Niece, Allison. Ah, to be seventeen again. Such a magical age. But I digress, back to the movie.

Every frame in this dream like story is an oil brushed painting. This film is so visually beautiful it will take your breath away. From dodging cannon balls in pink cotton candy clouds, to sailing ships in the sky, and a live golden sprite called Tinkerbell, such imagery will carry the young at heart to Never Land, forever and a day. And the score sweeps to match the brush of such sights the eye beholds.

The script was actually pretty simple, but is it? The director, P.J. Hogan, chose to follow J. M. Barrie’s book, a sweet little English Victorian children’s fairy tale with adult overtones, that tells the story of Pan, the boy who never grows up. This memory is in the thought of every responsible adult, in a whimsical wisp of a dream that is nostalgia.

So the story is set, the imagery is magic, the music is perfect, but always, that is the easy part. The writer, director, and most importantly, the cast must pull off the story to make it really sing. This is after all just a movie, and it is dictated that a movie should be generally profitable. I care not one wit for this, as I seek a diversion from reality, and "Peter Pan" the movie took me to childhood’s comfort. This cast really works.

There is Peter Pan of course. The Pan, the tempter at the bedroom window. Jeremy Sumpter is Peter Pan. He is a daunting young man, very athletic, and he has that melting smile of the mischievous boy that seems to affect the female heart. Yet, he is still a cocky cut-throat little soldier, ready to take on Hook and his band of pirates.

Jeremy finally breaks the mold, successfully, of middle aged gamine women who had played Pan in the past, and it is refreshing for sure to see Peter the way he should really be. As a young and brash boy, with dirty feet and hands, blond tousled hair, in one hand a sword, and in the other an acorn – a kiss, for Wendy. Jeremy as Peter has some rather heartbreaking moments that affected my male heart, and like all men, I suddenly felt a longing to be a lost boy.

Wendy’s father sans Captain Hook, is traditionally one in the same, and this movie rendition is no different. The disciplinarian, and forbidden male dominator, Jason Isaacs perfectly portrays Wendy’s Father and Captain Hook, in a delicious dichotomy of stodgy Victorian Dad and the vile evil villain of a pirate. Hook is not to be ignored for he is a key character in this tale. Hook is bad, but we can admire him. And for one moment, Wendy wants to be a pirate and join Hook and his motley crew, as "Red Handed Jill" – ah – a great pirate name, as Hook would remark with gusto.

Olivia Williams is cast as Wendy’s Mother. Olivia is one of the most beautiful women alive today. This is necessary, as she must impart a genetic note upon her daughter. Wendy is as beautiful too – just not quite grown up yet. Olivia as Mother of her kidnapped children, is heartbreaking, as night after night, she sleeps in their room, and insists the window be kept open for their return. And when they do, such joy, and Olivia’s maternal instincts convince a stodgy husband to adopt the lost boys.

Then there is the fairy sprite "Tinkerbell". She is a key player. Tink is the temptress, the reason Peter Pan stays young. Yet she holds faith in her magical wings and cements the story’s chapters together. Tinkerbell is portrayed by the current French coquette that wishes to be Bridgett Bardot, Ludvine Sagnier, who has been seen in French films, in various states of undress. Oh, how perfect, because Tink is a nymph, a sprite, a fairy, and has no concept of "clothing." She is perfect for this role of jealous female as a golden spiteful insect. And you will believe you can fly, if sprinkled with her pixie dust.

To round out the cast, Smee is notable as Hook’s comic relief, and Dame Redgrave as Wendy’s Aunt adds a necessary Victorian touch, the little girl who plays Tiger Lilly is precious, the mermaids are menacing, and Wendy’s brothers with the lost boys throw in the delicious little boy gang. Hook’s pirate crew is truly funny and revolting at the same time. Tictoc the croc is really big, and a very real looking digital monster. And who could forget Nana, the Newfoundland nurse dog, who’s own brand of protective mischief plays a part in the film.

But it is Wendy, precious and wise Wendy, that really, is what this tale is all about. A young girl on the cusp of womanhood. That is the most tender and fragile of times. She is in love for the first time in her life, with Peter – recalcitrant at parents and teachers authority. A budding beauty that seeks the freedom that Peter Pan gives. A most complex creature this nubile young lady. She is the focus of the story of Peter Pan.

What female actress could fit the bill? Well the makers of the movie looked for someone perfect, interviewed some 300 girls, and in doing so, found the perfect Windy. Rachael Hurd-Wood is an unknown, just pre-teen English lass with lush and long light brown hair, big blue eyes, a body so demure in flannel nightgown, she has dimples and a slightly toothy grin framed by full promising red lips, and such wonderfully perfect cheekbones which mark a little girl as a future beautiful woman. Prior to Peter Pan, she only acted in school plays. She captured my heart and soul as she did Peter’s.

And now, because of this part, Rachael is Windy always and forever. She takes on the roll as mother to the lost boys in a touching caretaker way. Yet she is tomboyish and brave enough to sword fight both Pan and Hook. And Wendy is the conscience of civilization. When Peter tempts her "come with me . . . we will never, never, have to worry about grownup things again." Wendy looks at him sadly and remarks "never is an awfully long time." But then Peter smiles and then Wendy smiles, and suddenly we are flying above the rooftops of London in our pajamas to Never Land. Wow! That’s love. That’s magic. That is the lure of Never Land.

If as a parent, you are reticent to take your child to this wonderful film, it would be as if you would have prevented said offspring from seeing "The Wizard of Oz." You must share this story with them, as it has all the whimsy of childhood magic that an adult can participate in, with, and as if, a child.

This is a wonderful film. One that adult and child can enjoy together. A true classic and I highly recommend it. Oh, and while you are at it, buy Barrie’s book as well, and read it to yourself and to your children, as Peter’s shadow watches over you.