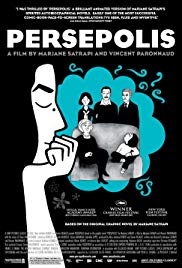 Storyline:
In 1970s Iran, Marjane ‘Marji’ Statrapi watches events through her young eyes and her idealistic family of a long dream being fulfilled of the hated Shah’s defeat in the Iranian Revolution of 1979. However as Marji grows up, she witnesses first hand how the new Iran, now ruled by Islamic fundamentalists, has become a repressive tyranny on its own. With Marji dangerously refusing to remain silent at this injustice, her parents send her abroad to Vienna to study for a better life. However, this change proves an equally difficult trial with the young woman finding herself in a different culture loaded with abrasive characters and profound disappointments that deeply trouble her. Even when she returns home, Marji finds that both she and homeland have changed too much and the young woman and her loving family must decide where she truly belongs.
Written by
Kenneth Chisholm ([email protected])
User Reviews: Persepolis tells the amazing story of a young girl growing up in Iran around the time of the Islamic Revolution. Marjane Satrapi does a wonderful job of bringing her story to life and drawing the viewer into her what it was to grow up during a time of political revolution. Using a unique style of animation, that closely follows the style of the graphic novel, the audience is pulled into a world that is much different than the world they are used to.

Marjane’s story is often times humorous and often times heart breaking without resorting to heavy handed sentimentalism that is often seen in Hollywood movies. There were times that I laughed out loud during the movie, particularly the "Eye of the Tiger" sequence which had me in stitches. Other times during the film I had to wipe a tear from my eye. I won’t spoil any of those moments for anyone, but there were parts of the film that left me crushed.

The characters in the story were all very interesting and all seemed very real. I loved watching Marjane grow from a child to an adult and seeing how she dealt with struggles as extreme as a revolution and as simple as the end of a relationship. Most of the supporting characters were interesting as well and extremely well thought out. The most memorable of the side characters though, would have to be Marjane’s grandmother. She almost acted as Marjane’s moral compass throughout the film and in most cases she did it with a great cynicism and humor that only someone who has lived through so much could have.

As an American I will probably never know what it is like to live in a state of such political oppression as the one depicted in the film. It is an extremely hard thing to even imagine what people go through during such political struggles. However, one of the things that makes this movie unique is that a lot of it is told from the point of view of a child that does not really understand the politics of what is going on around her. This really helped draw me into the movie. Since I do not understand what it is like to be in the situation, having the story told from the point of view of someone that doesn’t really grasp the enormity of the events unfolding around her really helped to bring me into the story. It was very helpful in trying to comprehend the scale of what was happening in the movie, not that I claim to totally comprehend what this young girl must have gone through.

The animation style of the film is definitely interesting and unique. It is a lot different than anything I have seen before and I really enjoyed the style that was used. The more simplistic animation that was used definitely worked well with the story being told from the point of view of a child. The child in the story could not totally grasp all the details of what was going on during the revolution and having a less detailed style of animation definitely helped emphasize this. Also, having a style of animation that was so different than what audience are used to also helped emphasize that we were viewing a world that was, in many ways, much different than our own.

Overall I really enjoyed the film and it is one that I may eventually want to see again. I really would like to read the graphic novels that it was based on and probably even a few of the other graphic novels written by Marjane Satrapi. I think she is a wonderful talent and I hope she continues to make such interesting films, perhaps bringing some of her other graphic novels to the big screen.

Storyline:At Alfea College, Stella, Aisha, Flora, Musa, and Tecna all graduate and become fairy guardians of their home planets. But, Bloom must watch graduation from the sidelines. The Winx try to save Bloom's parent...

Storyline:A married couple's seemingly perfect life is turned upside down when Lucia uncovers secrets that push her to break her usual routine.User Reviews: How to misuse great actors in a bad and meaningless plot usi...

Storyline:In the summer of '75 Pier Paolo Pasolini's film, "Salò", is stolen from the lab where he is editing it. This is just the first step of an intricate plan that will bring the great poet to his violent death.Us...