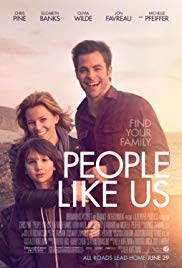 Storyline:
Workaholic and sleazy businessman Sam is extremely reluctant to leave New York and go to his father’s funeral. When he finally arrives, it becomes apparent that his mother and girlfriend are disappointed in him for “running away” whenever times get too emotional. Soon afterwards, he discovers that his father was sleeping around with another woman, and that Sam actually has a half-sister whom he never knew existed. His father has willed her $150,000 and has left Sam with the task of getting it to her. Frankie is a bartender also wrapped up in work just like her half-brother, and she has had a bad past and has now been left with the job of being a single parent to her troublemaker son, Josh. Josh is eleven years old but curses like a sailor and constantly makes fart jokes and sex jokes, making him popular with the bad kid crowd at school, although behind the act, Josh is depressed and lonely. Now Sam has to find a way to fix the past and reunite his mom, nephew and half-sister together …
Written by
GasmaskProductionsBooks
User Reviews: "People Like Us" has a fine cast, a fairly stimulating (yet safe) plot, and some heartfelt life lessons thrown in for good measure. The next paragraph contains a gentle spoiler about this films’ themes.

A man (Pine) receives some bad news about his family. He needs to do the right thing, grow up, and bust through the defenses he has spent years hiding under. As he makes a reunion of sorts with family members, the plot unfolds. Each character deals with their own personal set of challenges.

I’ll confess that I had hesitations about the casting. Pine is cute as-a-button, and I tend to be drawn to actors who are a bit rough around the edges. But I was wrong to doubt his abilities. He layered his role with some interesting nuances. His interactions with the Elizabeth Banks character were entertaining and fairly genuine. The young actor Michael Hall D’Addario was absolutely wonderful. Banks and Pfeiffer each turned in very sturdy performances. Wilde was also effective, but she needed more screen time.

Kudos to the director Alex Kurtzman for his reasonably light touch. It seems like he allowed the actors a long leash in developing their characterizations. This is no easy task, because Kurtzman also co-wrote the script.

The musical score had some strong moments, particularly when they highlighted classic rock tunes from decades ago. There were periodic sentimental tunes, which seemed a bit manipulative. And there was a beach scene which was a bit deflated, because it was so typically pretty. I wish this film would have taken more risks, and navigated through an even murkier emotional landscape.

At the end of the day, I would recommend this, and I look forward to seeing more films from Kurtzman. If you’re still with me at this point, I beg your pardon. Uh, bartender… I’ll have an extra dry martini with 2 olives, please.