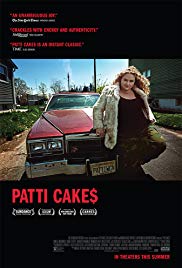 Storyline:
PATTI CAKE$ is centered on aspiring rapper Patricia Dombrowski, a.k.a. Killa P, a.k.a. Patti Cake$, who is fighting an unlikely quest for glory in her downtrodden hometown in New Jersey.
User Reviews: Poetry seeps into the cracked pavement of New Jersey. Not in stanzas, but in bars. The poets do not recite their work, they spit it. Their lines are shanks with jagged edges. They draw blood through their opponent’s insecurities. When a battle transpires, the participants sign on to gladiatorial bout that does not conclude until the loser lies motionless outside of a gas station.

Patti does not write for these moments, but these moments will cement her social standing. Resorting to ugliness empowers her rhymes with putrid fury. Even the knock off drug dealers affirm her fire. She is an insecure tyrant wary of haters, and drunk for admires. Her emerald dreams place her on a throne of excess, yet she wakes in a nicotine flavored home.

Her main man Jheri has the body shape of an anti-depressant. He has not abandoned his Indian roots, and pays homage to Bollywood exuberance in his verses. Paired with Patti, the duo slap out beats from her Chevy’s hood, and belt out lamentations of Dirty Jersey life.

Patti’s mother has her head in toilets all over town. Her daughter is her designated bartender and hair-holder. Barb was a hair rocker of yesterday, but now her records play in the cluttered kitchen, accompanied by drug store wine. Once a leach of men, now a leach of her dwindling family. Patti has to stomach her mother proclaim the two of them as "sisters".

Nana, Patti’s grandmother, chain smokes her way to her deceased husband. Patti knows she loves limericks, so she composes a new one with each morning’s brushstrokes. They are often lewd, but Nana is a sick old woman. Each bellowing laugh puts her soul closer lung failure, but they both know every bit helps.

"Superstar" is Patti’s name in Nana’s eyes. Her songs are crafted with supreme resentment. Her very existence is described as an accident, and her appearance is a giant piñata in a crowd of immature hoodlums. The chip on her shoulder is crater created by an asteroid the size of a scummy New England town. Barreling through these attacks, New York is only one break away.