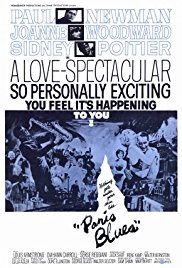 Storyline:
Ram Bowen and Eddie Cook are two expatriate jazz musicians living in Paris where, unlike the US at the time, Jazz musicians are celebrated and racism is a non-issue. When they meet and fall in love with two young American girls, Lillian and Connie, who are vacationing in France, Ram and Eddie must decide whether they should move back to the US with them, or stay in Paris for the freedom it allows them. Ram, who wants to be a serious composer, finds Paris too exciting and is reluctant to give up his music for a relationship, and Eddie wants to stay for the city’s more tolerant racial atmosphere.
Written by
alfiehitchie
User Reviews: PARIS BLUES won’t change your life unless you were one of those people (and I count myself one of them) that has been teetering on the verge of Euro-philia and this is the final straw to make you sell off all that crap you’ve acumulated over the years and live like a peddler just to be in Paris. Even if you are not, this movie could make you think twice. The core of the film is basically by-rote romances that, in themselves, would be non-descipt except for the fact that nothing Paul Newman touches can be bland. It is the elements surrounding these two romances that makes the film worth watching. Generally, to be a watchable film, the sum of the parts have to add up to more than the whole. Here, the film is simply the sum of it’s parts…and those parts are wonderful. If I was to tell somebody there was a film out there where Paul Newman romances Joanne Woodward in a fifties jazz club in Paris alongside Sidney Pointier while they compete with Louis Armstrong most would go "What?Where? What movie?" which was exactly my reaction. Paris, Jazz, coffee…Newman. It’s a confection with absolutely no nutritional value and yet you feel so much better having tried it.