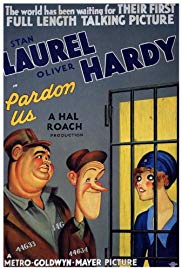 Storyline:
It’s Prohibition, and the boys wind up behind bars after Stan sells some of their home-brew beer to a policeman. In prison, Stan’s loose tooth keeps getting him in trouble, because it sounds like he’s giving everybody a rasp- berry. But it earns him the respect of The Tiger, a rough prisoner, and the boys manage to slip away during The Tiger’s escape attempt. They disguise themselves in blackface and hide on a cotton plantation, but are recaptured when the warden happens by. Back in the big house, they find themselves in a hail of bullets, caught between the state militia and gun-toting prisoners, when The Tiger tries another escape.
Written by
Paul Penna <[email protected]>
User Reviews: In & out of prison, Stan & Ollie just can’t seem to stay out of trouble.

"PARDON US" was the Boys’ first starring feature film. Rather disjointed and poorly edited, it plays more like a few of their short subjects strung together. However, the Boys never falter and they deliver a film whose parts are greater than its whole.

The film was meant to be a spoof of MGM’s popular THE BIG HOUSE (1930) and it helps to have seen that earlier movie to fully appreciate this one. Many of the standard conventions of the typical prison film are mocked here: the understanding’ warden, the dangerous convict cell mate, the confinement in Solitary, the escape chased by bloodhounds, the prison riot.

A few comedy pieces in particular stand out: Stan’s loose tooth; Ollie in the dentist’s chair; the Boys trying to settle into the constricted confines of an upper bunk. James Finlayson, Stan & Ollie’s old nemesis, makes the most of his one scene as the prison schoolteacher driven to despair by the Boys’ good-natured idiocy.

Walter Long is lots of fun as the Tiger, the meanest convict in the prison (Boris Karloff played the part for the French language version). Movie mavens will spot an uncredited Charlie Hall as the dental assistant.

An added delight is Babe Hardy’s rendition of Lazy Moon,’ one of the decade’s finest film songs. Ollie had a warm, evocative voice, full of feeling and emotion. Here, backed by the magnificent Hall Johnson Choir, his song reaches out of the screen and down the decades to touch the hearts of the audience.