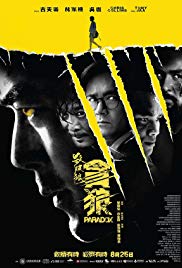 Storyline:
Hong Kong police negotiator Lee Chung-Chi has learned that his 16 year old daughter Wing-Chi has disappeared while in Thailand. He travels to Thailand and teams up with Chinese officer Tsui Kit and his partner, Tak, as they face off against American gangster Sacha, who is operating a black market organ smuggling ring. A series of clues lead Chung-Chi to not only learn the fate of his daughter, but overcome the odds to stop the ring once and for all.
Written by
Albert Valentin
User Reviews: The ‘SPL: Sha Po Lang’ brand in Hong Kong action cinema has come to stand for brutal, bone-crunching action in such memorable duels as Donnie Yen and Wu Jing’s alleyway brawl in the 2005 original, Yen and Sammo Hung’s mano-a-mano on a nightclub stage in the same, and more recently Wu Jing, Tony Jaa and Zhang Jin’s fight-to-the-death in the 2015 sequel.

‘Paradox’, the third in the ‘SPL’ canon, continues that grand tradition with director Wilson Yip returning at the helm and Hung as action director. Both franchise veterans ensure that the fights are just as fast, furious and fierce as their first film, but only judiciously bloody, so that the bloodletting never comes off as excessive. Among the highlights here are a daytime scuffle in an open bar that is followed by a breathless chase down Bangkok’s busy streets, a close-quarter skirmish in a flat that continues into the dilapilated apartment building’s corridor and onto its crowded rooftop, and last but not least a no-holds-barred showdown in a meat depot that is also a front for a mortuary of an illegal organ trafficking business. Each one of these action set-pieces are meticulously choreographed and beautifully executed, which is also credit to its stars Louis Koo, Wu Yue, Chris Collins and Jaa.

Besides Jaa, the rest are not quite as well-known for their martial arts skills, but the training, practice and hard work that each one has put in is clearly evident. In particular, Koo’s months of intensive training have paid off tremendously especially in the extended climax, which sees his character turn absolutely badass on tens of baddies successively in a vengeful rampage. Yue also proves quite the revelation; better known for his roles in Mainland TV drama serials than in movies (remember him in Police Story 2013?), the actor who holds a National Martial Arts Championship grade in wushu is less showy than his predecessors Yen and Wu but is no less precise or ferocious than them. Notwithstanding, you should know that Koo and Yue’s top billing here isn’t misleading; whereas Jaa took centrestage alongside his Chinese stars in the last movie, his presence here is no more than a glorified cameo and it should also be said that his absence is sorely felt, given that his one-on-one rooftop fight with Collins is arguably the most breathtaking sequence in the entire movie.

To Yip’s credit, as much as the fighting is the movie’s top draw, it never becomes its raison d’être but in service of the overall narrative. In that regard, all three movies have been thematically related, based upon the Chinese title’s astrological reference of three individuals whose position relative to one another signified death and destruction. Here, these three are Hong Kong detective Lee Chung-chi (Koo), who has arrived in Bangkok to search for his missing teenage daughter (Hanna Chan); local Thai-Chinese cop Chui Kit (Yue), who has a six-month pregnant wife and whose father-in-law is the police commissioner Chai (Vithaya Pansringarm); and political aide Cheng Hon-Sau (Gordon Lam), who will resort to any means necessary to get an urgent heart transplant for the ailing Bangkok mayor in order to sustain the latter’s re-election bid. Caught up in the ensuing melee is Chui Kit’s fellow police colleagues Kit (Jaa) and Ban (Ken Low) as well as the leader of an illegal organ trafficking syndicate Sacha (Collins).

It isn’t hard to guess just how the characters are connected to one another, but returning series writer Jill Leung builds the story nicely to have us empathise with Chi’s desperation, grief and vengeance as a single father at the loss of his beloved daughter. Just as visceral is the sense of powerlessness he feels against the corruption of those more powerful than him, so much so that despite responding in shockingly vicious ways, our sympathies remain firmly with him and his fists. More so than the earlier two movies, the storytelling here is a lot more fluid, confident and propulsive, good enough at least for us to overlook some of the obvious coincidences (like how Chui Kit and Tak’s vehicles seem to agree not to start one after another so both can end up at the same place at the same time).

So really, ‘Paradox’ is as solid an hard-boiled action thriller as it gets. The plotting is not just functional, endeavouring and largely succeeding to tell a story about karma, retribution and reconciliation. The acting is solid, each one of the performances a strong emotional anchor for the flawed characters whose relationships next to one another are defined by their respective choices and consequences. And perhaps most importantly to its fans, the action is as awesome as its predecessors, the fisticuffs often white-knuckle intense. This is as raw and real as it gets, set entirely against appropriately grimy backdrops in Thailand. As far as the ‘SPL’ canon is concerned, ‘Paradox’ is as fitting and satisfying an entry as it deserves, demonstrating not only that there is life yet to the series but that it is very much alive, kicking and definitive to Hong Kong action cinema itself.

Storyline:Nick Cheung plays a streetwise exorcist who becomes an overnight sensation when his extraordinary exorcisms are recorded and go viral on the internet. However, this attracts not only the attention from the m...