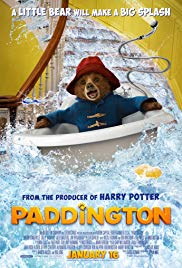 Storyline:
A young Peruvian bear with a passion for all things British travels to London in search of a home. Finding himself lost and alone at Paddington Station, he begins to realize that city life is not all he had imagined – until he meets the kind Brown family, who read the label around his neck (‘Please look after this bear. Thank you.’) and offer him a temporary haven. It looks as though his luck has changed until this rarest of bears catches the eye of a museum taxidermist.
Written by
Marmalade Films
User Reviews: This is an instant classic. The raw materials, a heart-warming, but lightweight children’s story are not the obvious stuff of a great film,the hybrid real life and cgi high risk. But it works, spectacularly. Translated into over thirty languages, and comprising over twenty books, the simple adventures of an anthropomorphised bear from darkest Peru have enchanted parents and children alike. Hamish McColl has done a fabulous job with the screenplay creating a story inspired by events in the books, but not telling a particular previous story.

The ingredients are carefully crafted. Casting is almost perfect. Hugh Bonneville is an arch paternal figure, a role popularised with his stint at Downton Abbey, a series which has enjoyed great success in the United States, broadening the film’s transatlantic appeal. Nicole Kidman is wonderful in her baddie, Cruella de Ville incarnation as Millicent. All dads will love the lingering shots of her from the soles of her vertiginous heels upwards. She flounces and pounces and generally has the most fun, particularly when enhanced by her no-hoper admirer Mr Curry (Peter Capaldi). The kids, play cameo roles well, housekeeper Julie Walters is a dotty delight with prodigious drinking game skills. The only character I didn’t quite buy was Sally Hawkins as the wife. Very Boho and Notting Hill, she didn’t quite convince opposite Hugh Bonneville as his wife.

At the eleventh hour crisis struck the production when Colin Firth left the production as the voice of Paddington. But sweet are the uses of adversity, and Ben Wishaw stepped in to capture the spirit and essence of the bear perfectly.

Director Paul King creates a wonderfully British landscape without wallowing in nostalgia too much. Tower Bridge, Buckingham Palace, the Natural History Museum, Red telephone boxes, double decker buses and English Bobbies are of course on show, but multi -cultural bustling London is also there, saving it from a sickly sweet end.

Not only is the story well told, but the dialogue is crisp, funny and fresh too. The linguist daughter learns how to say "I have been accused of insider trading and require legal representation" in Chinese, and when Paddington is tied up in a chase wearing a policeman’s helmet the local bobbies come to his aid with an "officer in distress" call.

King has some fun with nods to other movies too. The scene where the cabbies code becomes "guidelines" under Inquisitor Nicole Kidman echoes Johnny Depp in Pirates of the Caribbean, Paddington has to rescue his hat from a descending shutter blind as Indiana Jones did, and Kidman descends from a skylight in an attempt to capture Paddington as Tom Cruise did in Mission Impossible, with a further scene reprised as Paddington makes his escape up a metal vent shaft.

Ninety minutes is about right for a family film and at 95 minutes, not a second is wasted, nor dramatic lull endured. Hugh Bonneville’s scene in drag is more Les Dawson than Mrs Doubtfire and works in a surreal way, Matt Lucas gets his comeuppance as an awkward cab driver in a way that British MP David Mellor would surely approve of. Some homespun philosophy about outsiders, family, and love, stay just the right side of schmaltz neatly reinforcing the story’s wholesome credentials. The special effects are fabulous, particularly a flood, and the essentials, a hat, duffle coat and marmalade are all present and correct.

A certainty to be around for many Christmases, and years, to come.

Storyline:Rosaleen (Sarah Patterson) is a teenager, living in a country house in England with her family in the present days, and having a nightmare with wolves and werewolves in the Middle Ages. In her dream, her bor...

Storyline:A documentary of the tour for Pink Floyd's "delicate Sound of Thunder".User Reviews: Definitely the best live Floyd out there...I saw this Tour in L.A. Ca., and it was the first and only time i got to see th...

Storyline:This historical drama is an account of the early life of the future British Prime Minister Sir Winston Churchill (Simon Ward), including his childhood, his time as a war correspondent in South Africa during ...

Storyline:High in the remote Welsh mountains, five builders are brought together to renovate a sprawling old farmhouse. Housed in mouldy portacabins, tensions soon simmer between the men and the self-entitled aristocr...

Storyline:Sol is a beautiful, humble and sensitive young woman who has a very important trauma. In spite of everything she does not kill her biggest dream: find her better half, her other self, her partner for life. S...