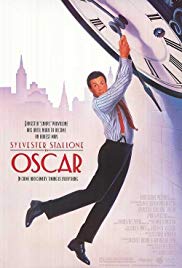 Storyline:
Angelo “Snaps” Provolone made his dying father a promise on his deathbed: he would leave the world of crime and become an honest businessman. Despite having no experience in making money in a legal fashion, Snaps sets about to keep his promise. He is faced with numerous problems: henchmen who know nothing but crime, the police who are convinced he is hatching a master plan, and Oscar, who has just got his daughter pregnant.
Written by
Murray Chapman <[email protected]>
User Reviews: Excellent timing, a fantastic cast, great soundtrack… actually, everything about this movie is terrific. It centers around mixed (and missed) messages, so a lot of it depends upon timing and straight delivery. These are accomplished in a major way.

The main center of the comedy, the valise, gets treated in a way that gets a bit old, but overall, I can’t get tired of this movie. Stallone does such fantastic comedy and has such an exquisite sense of timing and delivery, it’s a wonder anybody lets him do action movies. He missed his calling. Look for Ornella Muti (Princess Aura from "Flash Gordon") as the superb, dignified, and fiery-tempered Sophia, as Snaps’ wife and source of fear for the entire cast, and Tim Curry as Dr. Poole, in a genius turn as a mild-mannered professor discovering love for the first time. It’s a fairly obscure movie, but if you get the chance to see it, do treat yourself.