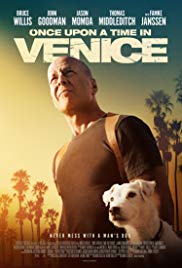 Storyline:
Steve Ford (Bruce Willis) is a down but not out L.A based Private Investigator whose professional and personal worlds collide after his loving pet Buddy is stolen by a notorious gang. A series of crazy circumstances find him doing the gang’s bidding, while being chased by two vengeful Samoan brothers, a loan shark’s goons, and a few other shady characters. They say a dog is a man’s best friend, and Steve shows how far a man will go to be reunited with him.
Written by
https://teaser-trailer.com
User Reviews: I really love this kind of movies, lighthearted low ambition comedies with detectives or heists, sun and sea, and there are fewer and fewer being made. They can be really great, put in few famous actors that are having fun and it is a recipe for a classic.

Unfortunately this is really bad, great casting on paper, but actors do not have fun, they act stiff, maybe because the script was poor (even though the basic plot itself isn’t too shabby) or maybe they just didn’t care. Goodman looks like he’s focused on not falling dead at any moment, and Willis looks really uncomfortable outside of his standard action hero scenes. Jason Momoa’s performance was the only one I felt up to star standards.

Yes the actors are getting old and we can’t expect blockbuster but I watched amazing comedies from Lemon, Matthau or Newman in their late years. This could be a gem and the wasted opportunity makes me really sad.