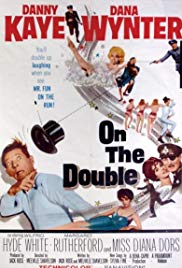 Storyline:
American GI Ernie Williams, admittedly weak-kneed, has an uncanny resemblance to British Colonel MacKenzie. Williams, also a master of imitation and disguise, is asked to impersonate the Colonel, ostensibly to allow the Colonel to make a secret trip East. What Williams is not told is that the Colonel has recently been a target of assassins. After the Colonel’s plane goes down, the plan changes and Williams maintains the disguise to confuse the Nazis about D-Day.
Written by
Jerry Milani <[email protected]>
User Reviews: I must have seen this movie on TV decades ago. It stars Danny Kaye, Dana Wynter and Margaret Rutherford. According to a comment I saw on this movie, it is not available on DVD. I searched on Amazon for it and couldn’t find it there. This is one of the funniest movies I ever saw. Danny is doing his usual forged identity. And to add a twist to it, the person he is impersonating has a bad eye and wears a patch, but Danny’s bad eye is the opposite eye and he has to wear a contact in his bad eye so he can cover his good eye. The scene where he drops his contact is priceless. Also, the scene when his aunt (Margaret Rutherford) shows up at a party still makes me laugh just thinking about it. Margaret gives an incredible performance, and Danny is at his funniest. I hope it comes on TV again.