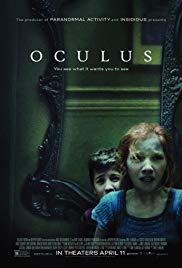 Storyline:
The twenty-one-year-old Timothy “Tim” Allen Russell is discharged from a mental institution by his psychiatric Dr. Shawn Graham completely healed from a childhood trauma where his father purportedly tortured and killed his mother before being killed himself by Tim. His sister Kaylie welcomes him in the parking area and brings him home. Then she tells that they need to destroy an ancient mirror that she has found through working at an auction house. She then steals the mirror and the reluctant Tim follows his sister and has fragmented recollections from their childhood, going back to when his father Alan buys a mirror for the home office of their new family home. Kaylie and Tim see a woman with their father in his office and the behaviors of Alan and Marie change, ending in a family tragedy. Kaylie blames the mirror and now she wants to destroy it with Tim. Will they succeed?
Written by
Claudio Carvalho, Rio de Janeiro, Brazil
User Reviews: This film was fantastic. I was creeped out the entire time, right from the introduction of the mirror. There has always been something slightly disconcerting about staring into a mirror at night, half expecting someone to jump out from over your shoulder. This film captured the essence of this perfectly. There was not a lot of action, not much blood or violence, but just enough to scare the audience. Just when you think that you have the mirror figured out, something else comes around to make you think otherwise. It makes you wonder if the characters are just crazy, that none of the film is actually real. You will never know exactly what is going on. That is what made it such a well done horror film, backed up by great acting performances from both adults and children. If you enjoy horror films as I do, go to see this film, you will not be disappointed!