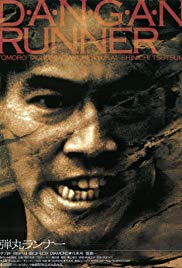 Storyline:
A salaryman, a drug addict and a yakuza go on a breathless three man chase through the streets of Tokyo, each for a different reason and fighting demons.
User Reviews: Full of verve and energy yet little happens. Well, one thing doesn’t happen, two things do and a chase ensues. One guy chases another and another chases him around the backstreets of Tokyo. A salaryman, a rock star drug addict and a yakuza member spend virtually the entire film chasing. There is some backstory provided and the whole makes a little more sense by the end. One difficulty for non Japanese is that this is clearly intended as a comedy but doesn’t quite make. There is a scene, for instance where the three pass a pretty girl bending down in the street and they are distracted. In a Benny Hill sense with the appropriate cartoon music and only a hint of sexy visuals, there is probably a joke, whereas here the content is too prurient for us sensitive souls to find it amusing. The whole is worth a watch and in particular for those quickly disappearing little streets, here I understand mainly those behind Nakano Broadway.

Storyline:A Japanese merchant who leaves his wife behind in order to travel to Manchuria, where he witnesses an act of barbarism. His subsequent actions cause misunderstanding, jealousy and legal problems for his wife...

Storyline:There is almost non-stop action and violent brutality guys get cooked to death in oil drums, fires erupt and car explode.User Reviews: Dozens of these yakuza films are churned out every year. Some are wonder...

Storyline:A working class young man, Tetsuo, who distrusts all rich people, falls in love with a girl, Chika, from an affluent family. He has a difficult time, but love survives despite the problems.User Reviews:

Beautiful Wrestlers: Down for the Count (1984)

Storyline:Boatman is Gianfranco Rosi's account of a boattrip along the Ganges river, together with his helmsman Gopal. They pass tourists and Indians who are bathing, working or meditating. In a series of small portra...