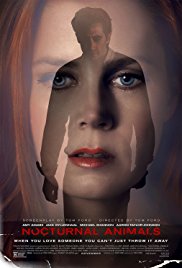 Storyline:
A “story inside a story,” in which the first part follows a woman named Susan who receives a book manuscript from her ex-husband, a man whom she left 20 years earlier, asking for her opinion. The second element follows the actual manuscript, called “Nocturnal Animals,” which revolves around a man whose family vacation turns violent and deadly. It also continues to follow the story of Susan, who finds herself recalling her first marriage and confronting some dark truths about herself.
User Reviews: Nocturnal Animals is a dark and devilishly stylish thriller from Tom Ford, who knows a thing or two about style having worked as creative director for both Gucci and Yves Saint Lauren in the past. It could have been in danger of being a case of style over substance however, Ford’s perfectionism makes this one of the most powerful films I’ve seen all year.

Susan Morrow (Amy Adams) is an art gallery owner who spends most of her life at home alone, with her husband often out of town on business. When Susan receives a manuscript to a novel written by her ex-husband, Edward Sheffield (Jake Gyllenhaal), she finds herself immediately engrossed.

As Susan continues to read the novel, she has flashbacks to how her relationship with Edward broke down as well as thoughts that the violent thriller is a veiled threat against her from Edward.

I didn’t know what to expect from Nocturnal Animals as I hadn’t seen any trailers and Ford’s film ended up blowing me away. The way Ford tells the story showcases how inventive and powerful he is as a filmmaker, the narratives of both Susan’s life and Edward’s novel combining brilliantly and leaving me in a trance like state.

Edward’s novel provides the film with its dark soul, the story of Tony Hastings (also played by Jake Gyllenhaal) and his family who run into trouble when travelling through the night on the road to their country home. It’s pretty heavy stuff but it plays an essential part in making this such powerful viewing.

This is a gorgeous film to look at as well, Seamus McGarvey’s cinematography echoing the story’s bleakness and the brutality of Edward’s supposed veiled threat to Susan. The combination of the visuals with Abel Korzeniowski’s dream-like score heightens the sense of escapism felt by Susan as she reads Edward’s novel.

Coming to the performances, Nocturnal Animals features a very impressive ensemble cast all at the top of their game. Amy Adams yet again proves why she’s one of the most versatile actresses with a performance that combines the assurance of an art gallery owner with the vulnerability of someone who knows they’ve made mistakes in their past. With this and Arrival out in the coming months, expect to see Adams get some form of recognition come the awards season, maybe for both.

Adams is joined by Jake Gyllenhaal, who takes on dual roles yet again for this film. Gyllenhaal has really grown as an actor, particularly in the last five years, and its great to see him continue that in Nocturnal Animals, more notably in the role of Tony Hastings, a creation of his other character Edward.

The rest of the cast features a scene stealing Michael Shannon, who I’ve really grown to appreciate these last few years, a career best performance from Aaron Taylor-Johnson, who is truly vile as the villainous Ray, and Laura Linney who, even in the short space of time we see her, makes one hell of an impact.

I cannot speak highly enough of Nocturnal Animals, a stylish thriller that has more than enough substance to it. I will definitely be checking out Tom Ford’s A Single Man after this and I sure as hell hope we see more work from Ford in the future.