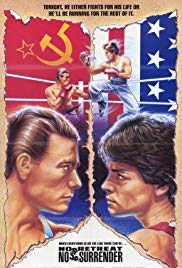 Storyline:
Jason Stillwell, a Bruce Lee fan, is beaten numerous times and trains from the ghost of Lee. Jason then must use his newly acquired skills to save Seattle from a crime syndicate, whose top martial artist is the deadly Ivan.
Written by
Albert Valentin <[email protected]>
User Reviews: Before watching the movie I had in my mind that this was just going to be another dodgy movie but with a bit of van damme thrown in. How wrong. This movie truly is a classic, the cheesy music, (especially the end credits) brilliant montage scenes and especially the fighting itself. This isn’t your traditionally badly choreographed Van Dammeesque movie but a very well done job. The fight scenes a lengthy and extremely enjoyable, and everyone in the movie can kick and punch very well. The main character Kurt McKinney (Jason) turns up the style later in the movie by pulling off some unbelievable training exercises, such as his two-finger one handed push ups! OK – so the acting is very ropey – but who cares! If you’re looking for an enjoyable evening in and a self motivational movie – this is the one!