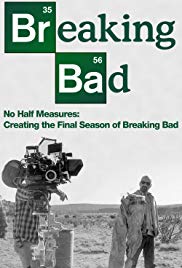 No Half Measures: Creating the Final Season of Breaking Bad (Video 2013)

Storyline:
An extensive, detailed account on the incredible legacy Breaking Bad created before it had even ended, whilst documenting in intimate detail the filming of it’s final season.
User Reviews: If the finale of Breaking Bad made you cry, prepare to get out the tissues again. This documentary relives the final episodes of Breaking Bad from an even more heart-breaking perspective… from that of cast and crew who just can’t let go of their roles. It’s amazing to see. Only a show like Breaking Bad has that kind of power.

For those who don’t know, this documentary comes with the fairly expensive Blu-Ray barrel that contains the entire series. The good news is that the difficulty of obtaining this documentary is just about the only negative, as it provides a great insight into how the second half of the final season was created.

It’s really great just how much the documentary let’s you see… from the writing room, to various memorable sets, and even the editing room… the documentary teaches a lot about what goes into creating an episode of a television show… and what goes into creating one of the greatest t.v. shows of all time. Finally, like I mentioned before, it’s just great to see how much all the cast and crew loved their roles and how close they were. Bryan Cranston and Aaron Paul’s goodbye speech left me in tears.

So, here’s the verdict:

THE GOOD: An excellent documentary about an excellent show. Goes far beyond what anyone would expect from a documentary depicting the creation of a show.

THE BAD: It’s impossible to get your hands on unless your rich and have money to blow on buying the entire series of Breaking Bad. Also stinks for the people who already bought the first four seasons.

THE VERDICT: No Half Measures get’s a 9 on 10. If it was out separately on Blu-ray, it would be a must-have for any Breaking Bad fan or anyone curious about the production of one of the greatest television series of all time.