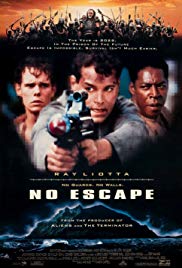 Storyline:
Robbins is sentenced to prison for the assassination of his general officer, a prison you leave only when you die. Since nobody ever leaves the prison, nobody knows what the prison is like. The prison manager realizes this and buys himself an island playground called “Absolom,” where the worst prisoners are free to create an isolated barbaric society, and where the strongest men rule…a living hell. Robbins is sent to Absolom after he almost kills the prison manager.
Written by
[email protected]
User Reviews: decent flick. Definitely better than i thought it would be. however there is one moment in the film that supremely creeped me out. There’s a moment where the prison warden is reading the rap sheet of capt. Robbins (Ray Liotta), that includes some of his special forces history. He reads off saying something like "oh so you were in Libya Behngazi, in 2011?" Very creepy for a movie made in 94, given whats gone in in Libya, Behngazi and that its happened in 2011. Also the fact that like Capt. Robbins, in in the American special forces, recently 6 soldiers working for British special forces were captured and deported in Behngazi Libya.

That was the biggest WTF moment in the movie for me lol.

Overall though not a bad flick. Would have been disappointed if I dropped a few bucks on it in theatres, but i saw it cheaply in netflix and it was worth it. check it out!