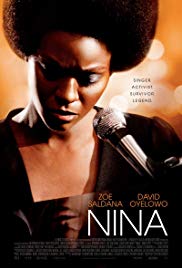 Storyline:
The story of the late jazz musician and classical pianist Nina Simone including her rise to fame and relationship with her manager Clifton Henderson.
User Reviews: I came in with expectations about this film. They weren’t particularly high but what I did expect was to a lesser degree the music and vocal styling. Zoe Saldana as Nina Simone missed that mark completely. Unlike Jamie Fox in Ray where he magnificently captured Ray Charles’s vocal patterns and musical style, you get none of this with Saldana’s Nina. In fact, it doesn’t transport you away at all. It’s an unpleasant look into Nina’s last years of her life, one that you do not wish to fully examine. And then there is the makeup that was applied to Zoe Saldana. It was not a visual look that was welcomed. I don’t know if they were trying to capture Nina’s appearance but this too was flawed and I go back to Jamie Fox role as Ray. Maybe Zoe Saldana was the wrong choice although I do see her being credited as one of the producers along with David Oyelowo who also has a role in this so maybe this was more of a vanity thing because they did it and figured it was easier for her to play the role. the other thing that bothered me was that they kept jumping from one era to another without any consistency. It was a visual headache to the story that just didn’t fit. This was tough to watch.