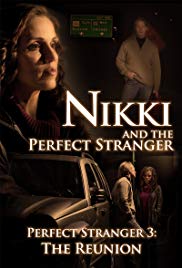 Nikki and the Perfect Stranger (2013)

Storyline:
In this third and final chapter of the ‘Perfect Stranger Trilogy’, Nikki Cominskey, now in her 40’s and no longer a high-powered attorney, finds that the spiritual life she signed on for is not all it was cracked up to be – leading to a second, and defining, encounter with the Son of Man.
Written by
Murphy Slone
User Reviews: Having met "Jesus Christ" (Jefferson Moore) personally many years earlier, "Nikki Cominsky" (Juliana Allen) has since become disillusioned with her faith and quite bitter in the process. So after an argument with her "mother" (played by Georgette Kleier) she decides to drive at night back to her home in Chicago. On the drive back, however, she has car trouble along the interstate and while calling a repair service looks up and notices Jesus standing there with a gasoline can in his hand. Although she doubts that her car has run out of gas he assures her that this is the case and afterward they proceed down the highway together where he then continues to teach her things that she never quite comprehended before. Now rather than reveal any more I will just say that this film was nowhere close to its two predecessors in that it lacked the requisite emotion required for a movie of this type. For example, when Nikki is stranded at night on a busy intersection and sees Jesus standing there in front of her one would think that she would be either excited or relieved. Instead she seems to take it for granted and openly doubts his ability to diagnose the situation correctly. Of course, a person could argue she was merely expressing her view of life at this particular point but that simply doesn’t resonate with this incredible moment at hand. Likewise, her continued resistance from one scene to the next merely added to the strange ambiance generated throughout the film. Again, it paled in comparison to its other two predecessors and for that reason I have rated it accordingly. Below average.