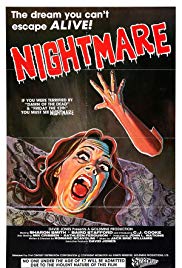 Storyline:
A mental-patient, who is troubled with horrible nightmares, has escaped from his hospital. Now on the streets he can’t help killing innocent people. But there is one family he is more than interested in and when he tries to kill them, he finds that it’s not that easy.
Written by
Tobias Broljung <[email protected]>
User Reviews: The infamy of "Nightmare" no doubt largely centers on the fact that the film’s distributor faced prison time for refusing to cut down one scene from the film for its release in the United Kingdom. I mean, after all, how many horror films have that under their belt? The plot follows a disturbed schizophrenic who escapes from his experimental psychiatric hospital in New York City and heads down the coast to Florida, where his wife and children reside, killing along the way before making an attempt at his final hometown hurrah.

With "Halloween" and "Maniac" being obvious influences here, "Nightmare" feels much more like a ’70s picture than it does a product of the ’80s, and its confluence of influences might be precisely why. The film’s formula is fairly straightforward, although its subject matter is remarkably dark, insofar as it has to do with a man who can’t help but want to slaughter his own children— it’s a macabre affair all around, and the grindhouse aesthetic only bolsters the film’s sinister tone. It’s part slasher film and part psychosexual thriller, with leading man Baird Stafford playing the villain who’s entire distorted existence seems to hinge on his childhood experience of witnessing his father’s affair (and subsequently slaughtering both parties in their bed). The film does meander a bit between the realms of dramatic thriller and splatter epic, but it’s an engaging watch none the less.

I’d be lying if I said that the real attraction here for most people is the remarkable gore effects, which were controversially credited as being the work of Tom Savini— turns out Savini was apparently just a friend of the effects director and didn’t actually work on the film, but regardless, the film showcases a plethora of elaborate murders with some remarkably nasty special effects; throats are slashed, people are stabbed, and heads roll, and Romano Scavolini makes sure his audience has front row closeups to all the nitty gritty details. The special effects work, though dated in some regards, is still surprisingly effective.

Overall, "Nightmare" is a deserved cult classic that would appear to have come from the drive-in era of the late ’70s; despite the fact that the film was made in the following decade, it retains a gritty exploitation feel in which violence is the central spectacle. Like I said, it’s a dark movie— and a gratuitously violent one. It’s the kind of thing you watch and then want to shower after. Like after a humid Florida evening, the film leaves you feeling slightly grimy, but that’s what it sets out to do from the first reel. 7/10.