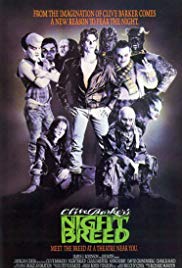 Storyline:
A community of mutant outcasts of varying types and abilities attempts to escape the attention of a psychotic serial killer and redneck vigilantes with the help of a brooding young man who discovers them. Based on the novel “Cabal” by Clive Barker.
Written by
Keith Loh <[email protected]>
User Reviews: Boone is a man plagued by secrets and nightmares. His situation is greatly worsened when his therapist reveals his darkest deeds. With his girlfriend in tow and the therapist hot on his heels will Boone be able to find this town of monsters in his dreams and what will happen when he finds it and they find him. I’ve always enjoyed this film since its’ release. It is a good solid monster flick with some gore and a little mythology to boot. The creature effects are even to this day some of the darkest and twisted ever seen. The directing and look of the film are solid. Translating Clive Barker’s imagination is probably very hardeven by Barker himself. The acting of the leads is very good and Cronenberg (a director in his own right) is sedate and creepy. If Hopkins wasn’t available to play Hannibal the cannibal I would have chose him. The main detractor is the way the studio hacked up the original cut. And poor marketing didn’t help either. Please release a director’s cut someone. 7/10