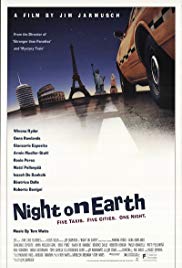 Storyline:
A collection of five stories involving cab drivers in five different cities. Los Angeles – A talent agent for the movies discovers her cab driver would be perfect to cast, but the cabbie is reluctant to give up her solid cab driver’s career. New York – An immigrant cab driver is continually lost in a city and culture he doesn’t understand. Paris – A blind girl takes a ride with a cab driver from the Ivory Coast and they talk about life and blindness. Rome – A gregarious cabbie picks up an ailing man and virtually talks him to death. Helsinki – an industrial worker gets laid off and he and his compatriots discuss the bleakness and unfairness of love and life and death.
Written by
Ed Sutton <[email protected]>
User Reviews: It’s not that this movie is non stop laughs, but just that it is so smart and such intelligent humor. It’s got a clever premise about five short stories involving cab rides in different cities, but it’s the specific situations that will crack you up. One after another, they are all hilarious. Roberto Benini’s scene had me laughing out loud, and that never happens. The only sketch that wasnt so great was the opening one with Winona Ryder. Everything that followed it rocked and impressed the hell out of me. A smart comedy. not too many of those.

Storyline:Director of Photography Robby Müller is one of the few people in the world who knows how to play the sun. How to catch its rays like butterflies. How to strike its beams like chords. When Robby moves his cam...