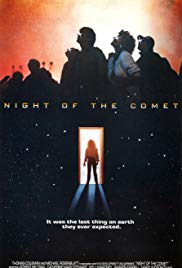 Storyline:
It’s the first comet to buzz our planet Earth in 65 million years, and everyone seems to be celebrating its imminent arrival. Everyone except Regina Belmont, and her younger sister Samantha, two Valley Girls who care more about fashion trends than celestial phenomena. But upon daybreak, when the girls discover that they are the only residents of Los Angeles whom the comet hasn’t vaporized or turned into a zombie, they would do what all Valley Girls do – they go shopping. However, with the help of a friendly truck driver, the girls save Earth and escape from flesh-eating zombies and blood-seeking scientists in hot pursuit.
Written by
Jaime Kidwell
User Reviews: Trapped in a hellish copyright limbo for over a decade, Thom Eberhardt’s "Night Of The Comet" is a film whose reputation is due for a serious rehabilitation. Generally–and wrongly–categorized with typical 80s teen horror films, "Comet" is in fact a smart, skillful parody of the low-budget sci-fi horror classics of the 50s, 60s and 70s–and a wry commentary on teen culture in the 1980s as well. For those familiar with the original films, the parody "clues" are all over the place–not least of which is that the early part of the film takes place in the back of LA’s classically offbeat El Rey movie theatre, which is showing low-budget B horror movies. Most of the "scary" scenes are preceded (subtly or otherwise) by the famous "red light" warning used commonly in the 60s and 70s. And the apocalyptic plot, settings and dialog, especially among the scientists, are straight out of the 50s.

Catherine Mary Stewart is by far the centerpiece of the movie as Reggie, the only teenage girl in Los Angeles who’s both a lowly-paid theatre usher and an expert with assault weapons. She is most definitely *not* a Valley Girl. A pre-"Voyager" Robert Beltran is Hector "date night in the barrio" Gomez, the classic b-movie hero, and far more engaging here than his stoic, dry-as-bones role for the McTrek franchise. Kelli Maroney brings the totally 80s camp value as Valley Girl Samantha, who realizes with horror that her pool of potential Izod-clad boyfriends has just shrunk dramatically. Geoffrey Lewis sheds his mostly Western image here as the deliciously megalomaniacal leader of the researchers, whose taste for superscience soon gives way to a craving for hot buttered gray matter.

Eberhardt is a canny director who doesn’t miss a trick–the scares are rare, but when they come, they’ll get you. The gore is minimal, but the atmosphere of malevolence gets progressively thicker until the climax. The tightrope between comedy and fright is skillfully toed–undead droog stockboys, anyone? The effects may not be the digitized visual pablum people take for granted these days, but in a way they’re more engaging for their rawness. Anyone who thinks this was a low-budget movie has never tried to completely empty out downtown Los Angeles at 7 am for a film shoot. Thom Eberhardt should be hailed for his brilliantly sharp, funny script and his deft execution as director.

Veteran sci-fi/indie/horror actress Mary Woronov is "Night Of The Comet"’s direct physical and spiritual link to the golden days of the genre. She’s passing the baton here to a new generation of camp sci-fi/horror fans. That nobody has thus far picked up that baton is a tragedy.

To address a distressingly common misperception: the comet in question is *not* Halley’s comet. Both in-film plot elements and the film’s tagline suggest this comet only appeared once before, when it wiped out the dinosaurs. Halley’s comet, on the other hand, has had more comebacks than Cher.

"Night Of The Comet" works pretty well the way a lot of people view it–as a simple 80s cheesy sci-fi comedy. But as with "Rocky Horror," if you’ve seen the original material it’s spoofing, the results are a hundred times more rewarding. A future DVD release is a must.