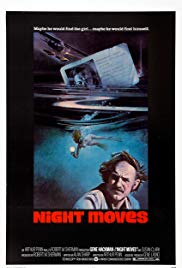 Storyline:
Private detective and former football player Harry Moseby gets hired on to what seems a standard missing person case, as a former Hollywood actress whose only major roles came thanks to being married to a studio mogul wants Moseby to find and return her daughter. Harry travels to Florida to find her, but he begins to see a connection between the runaway girl, the world of Hollywood stuntmen, and a suspicious mechanic when an unsolved murder comes to light.
Written by
Gary Dickerson <[email protected]>
User Reviews: Private investigator Harry Moseby (Hackman) has his hands full retrieving a teen runaway (Griffith) from the Florida Keys back to Los Angeles. A routine case shuffled off to him by a rival, the matter nevertheless evolves into a complicated multiple murder plot. Normally distant Harry has difficulty separating his personal feelings from the facts.

The first half of this film is such a dull and plodding downbeat soap opera that it challenges the patience of the viewer. The relationships of a group of emotionally broken people hinting at personal guilt over sordid pasts thrown together by less than ideal circumstances don’t always tie in with the actual narrative. But they aren’t really meant to.

The real mystery of the story rests within the human interactions and what is important vs what is trivial. Harry is in fact a very poor detective. He lets those few emotional connections he is able to make with people cloud his judgements whilst assuming guilt on the part of those he doesn’t like. What makes him a hero nevertheless is that he doesn’t quit even if it means discovering personal betrayal.

Telling moments are rife. The way different people react differently from each other is a continual source of confusion for Harry. His inability to connect with his own wife on an emotional level has made her feel alone even in their most intimate moments together. Yet he lets his guard down with the wrong kinds of complete strangers. It certainly isn’t by choice that he has chosen misread bot the situation and the people surrounding it..

This is a more sophisticated form of detective story in that it offers an examination of the mindset of the detective – one who happens to be emotionally vulnerable and even a tad fragile.