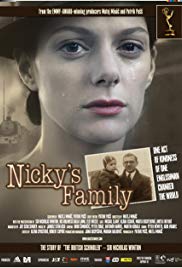 Storyline:
This docudrama tells the story of Nicholas Winton, an Englishman who organized the rescue of 669 Czech and Slovak children just before the outbreak of World War II. Winton, now 102 years old, did not speak about these events with anyone for more than half a century. His exploits would have probably been forgotten if his wife, fifty years later, hadn’t found a suitcase in the attic, full of documents and transport plans. Today the story of this rescue is known all over the world. Dozens of Winton’s “children” have been found and to this day his family has grown to almost 6,000 people, many of whom have gone on to achieve great things themselves.
Written by
Matej Minac
User Reviews: I didn’t know what to expect from this movie. After viewing so many Holocaust related films over the years, the themes seem to melt into one another. In my searches, I’ve learned about the name and location of the camps, the names of the most terrible people, and the sociology of a nation that surprisingly contracted, almost overnight, a deep mental illness that it did not wish to free itself from. That illness was hate.

This movie, however, after the first half of it, kept me in tears. I am a man who finds it extremely difficult to cry, except on occasions when I watch a touching movie or read a heartfelt book. Without those avenues, I am unable to shed a tear. But this film was so completely able to bring out of me tears by witnessing the impact the good deeds of one man can cause through a kind of domino effect.

Nicholas Winton, still alive today at 105, is a man worthy of all the honors bestowed on him. He is a hero of the highest caliber due to his unflinching commitment to save the lives of 700 Czech children during the advance of the Third Reich into Czechoslovakia in 1938.

What he did was provide for these children English families to adopt them. Tirelessly he worked to sometimes forge papers in order to save children he barely knew, all out of an altruistic character not often seen in stock brokers, which he was prior to making a visit with a friend to inspect for himself what Hitler was causing within Czechoslovakia. That visit changed his life forever, for the good of hundreds of Czech children.

Nicky wrote hundreds of letters seeking aid from all countries, and fashioned pictorial listings of all the kids for selection by their future parents, but only one country was willing to open their hearts to these desperate children, England.

Because of his work, Nicky now has a "family" of some 5800 offspring from the grown children he arranged to secure passage to a new life in England. The kindness of the English people shown to these children makes me extremely proud of British countrymen and women. It was stated on the film, that the poorest of English people were the most compassionate and loving.

Watch the documentary, but be sure to have Kleenex sitting by you as you will, without a doubt, be very moved.

Storyline:In Berlin--during one of the hottest summers in the last seven years--Antonia, a single mother and an exhausted hotel maid who has lost faith in her, drives her son to the bus station to visit his father in ...

Storyline:For decades, Diana Vreeland was one of the leading authorities in fashion through eccentric self-taught skill and a bold stylistic audacity. This film guides you through this fashion pioneer's long career fr...

Storyline:A documentary on former New York City club owner Peter Gatien.User Reviews: I used to party at these clubs and Peter G did not get what he deserved. This man hosted the venue for people to sell drugs and hav...

Storyline:In 1921, in London, the arrogant and skeptical Florence Cathcart is famous for exposing hoaxes and helping the police to arrest con artists. The stranger Robert Mallory tells her that the headmaster of a boa...